The other night my girlfriend and I watched a documentary about Fred Rogers, the beloved host of the Mr. Rogers’ Neighborhood show, called “Won’t You be my Neighbor.” The show ran for over 30 years from the late 1960s until the very early 2000’s. Mr. Rogers would gather a small group of children and speak to them directly or through ventriloquism with his collection of puppets and would often invite a cast of other neighborhood friends such as Officer Clemons. Mr. Rogers and his colleagues would talk or sing about a wide variety of topics including current events, where they even covered such frightening topics as the assassination of Robert Kennedy, the general theme of divorce, and returning for a post 9/11 special in late 2001. 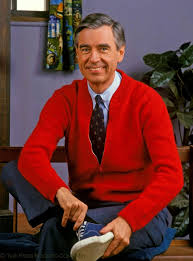 Mr. Rogers was a voice of comfort, safety, and encouragement for millions of children from those on set to those watching from home. As such they didn’t shy away from frightening subjects, it was important that children hear from Mr. Rogers and be comforted by his words and assurances.

More than anything, what Mr. Rogers wanted to teach his audience, was that they were perfect and deserving of love exactly the way they are without having to accomplish or do anything. Admittedly I did not watch the Mr. Rogers show growing up, puppets scared me to be completely honest. So watching this documentary just the other night was probably my largest exposure to Mr. Rogers and his thoughts. As I was watching though my mind lit up because I realized that what Fred Rogers had been saying since the 1960s was exactly what I was writing about in my blog. This message of course was nothing new though it had become largely forgotten or glossed over until Mr. Rogers put it back into mainstream consciousness via Public Broadcasting and contemporary pop culture.

While watching the documentary it became obvious that part of Mr. Rogers’ love of acceptance and self love came from the need to find that within himself. The film covers the early life of Fred, who as a young boy struggled with his weight and was often mocked and bullied for his physical differences as well as his gentle and pacifist demeanor. He was given the moniker of Fat Freddy by his grade-school classmates and a large part of that trauma lived on in him and was a driving force behind his message to convey self-love and happiness in children, while at the same time he was in all likelihood trying to receive the same message within himself in light of his childhood traumas. David Newell who played Speedy Deliveryman Mr. McFeely said: “if there was no fat Freddy, there wouldn’t have been a Mr Rogers. Shame how sometimes the kindest, and most endearing personalities are borne out of fierce traumas.

Fred Rogers even dealt with criticism and bullying as an adult, where his gentle demeanor was mocked as excessively nice or a lack of manhood. He was often the subject of satire or spoofing on various comedy routines, some of which he did find amusing so long as they weren’t done cruelly, though they often were. There was even at many points public outcry against Mr. Rogers’, accusing him of ruining our youth and creating a culture of losers because they were taught that they didn’t need to achieve anything in order to be special, happy, or worthy of love.

Imagine the insecurity and lack of decency in a culture that thinks that a child’s worth is tied only towards what they achieve in terms of career success, income, or recognition. If you want the definition of a snow flake I think that is it. Not someone who loves themselves but someone who is so insecure that they cant define happiness in any other terms save for recognition, wealth, and achievement. And what’s worse is they project these so called values on other’s, namely children. A society that behaves that way has lost its way, luckily we had great men like Fred Rogers to lead us back towards the light of decency.

Watching Won’t You Be My Neighbor has inspired me to go back and actually start watching Mr. Rogers’ show, something I could have badly used as a child and as a young adult trying to learn how to be happy and how to love myself simply for being. In a world where we are valued for our contributions to the capitalist system, and where we are taught that only once we hav achieved that then we can be happy, I am grateful for the life of people like Fred Rogers’ who shone the light on true happiness, despite the harsh criticisms he and others face for it. I look forward to taking a deeper look into Mr. Rogers’ life and continuing to share his message of happiness through this blog. I wish I had received more of his message as a young boy, and I have every intention of paying close attention to his work now, even as an adult.

I highly encourage you to watch Mr. Rogers if possible.

Link to the documentary: https://www.amazon.com/Wont-You-Be-My-Neighbor/dp/B07FCQ2T9K

You can also check out his website with full episodes, commentary and more from Fred Rogers himself.