In a previous post I talked about how Denmark was consistently ranked as one of if not the happiest countries in the world, and elaborated on hygge, perhaps the defining concept of Danish culture, and its influence on their outlook.

It turns out that Denmark isn’t the only happy country in that part of the world. Of the five Nordic countries: Denmark, Finland, Iceland, Norway, and Sweden, all five have occupied a top 10 spot on each of the UN’s happiness reports, typically with at least three of the five being in the top 5 internationally.

It is no coincidence, and it isn’t just hygge that makes the Nordic countries happy, though each of them does seem to possess their own idea, similar if not identical to the Danish hygge. It turns out that they share a multitude of similarities and that the overall sense of wellbeing amongst citizens of these nations comes from their high levels of satisfaction across multiple measures.

Among the statistics that were considered by researchers trying to understand what made these 5 neighboring nations so happy was social mobility. Social mobility indicates the opportunity of citizens to receive quality education, and quality high paying jobs. These five countries were ranked 1-5 on this category, meaning that more-so than anywhere else, the social status of one’s parents had less to do with how a citizen of this country would fare later in life. In other countries, such as the United States, the single greatest indicator of how much wealth a person will acquire in their life time, is how much wealth their parents had. In the Nordic countries, this means very little due to the social mobility, indicating that even the poorest members of society would have as much chance to succeed as those wealthier. Of course, wealth doesn’t mean happiness, but knowing that one has every opportunity to succeed surely improves outlook.

Another statistic of note is that all of the group, with the exception of Iceland, are in the top 10 internationally in terms of welfare spending. The taxes in most of these countries are extremely high, however these taxes are spent on the improvement of society. I think that the way that these high taxes are viewed in these nations is telling. To pick on my home country, the united states, again, it can be political suicide to suggest a tax raise. In the Nordic states however, the high tax rate does not concern the citizens who believe that their tax dollars are an investment in their society. Speaking of his home nation of Denmark, Meik Wiking, CEO and Founder of the Happiness Research Institute said: “The key to understanding the high levels of well-being in Denmark is the welfare model’s ability to reduce risk, uncertainty, and anxiety among its citizens and to prevent extreme unhappiness.” This could likely be extrapolated to cover the entirety of the Nordic states.

Imagine how much happier you would be if you did not have to fear whether or not you could afford healthcare for your sick child. imagine how much happier you would be if you didn’t have to fear losing your home should you suddenly find yourself unemployed, knowing that the government would care for you until you got your feet back under you. Imagine how much easier, and how much greater opportunity our youth might have if they could receive a nearly free, and quality, publicly-funded university education, allowing themselves to become productive and valuable members of an educated society without having to face mountains of debt. Such is the state of happiness in the Nordic states where social spending is high. This creates the most pronounced differences of happiness amongst the poor of various nations. It is one thing the take into consideration the levels of happiness in those who are most well off, those for whom every opportunity is afforded. But what of those for whom the system seems to be stacked against. Therein lies the greatest difference when considering the Nordic Countries: the worst off among them still experience happy and promising lives.

With regards to public spending: it isn’t to say that American’s, and other nationalities for that matter, are collectively more selfish, or don’t care about their poor. A lot of the issue with taxes and social spending in America is that Americans tend to be very distrusting of their government, believing that a large amount of their taxes are wasted lining the pockets of crooked politicians or simply being wasted through the nonsense of bureaucracy. To that point, all of the Nordic countries ranked in the top 10 internationally with regards to political corruption, and trust of their government. Because of these high levels of trust, they believe and have confidence that their tax dollars really are going to the betterment of society.

One final notion I want to discuss is how those citizens of the Nordic countries view themselves and their neighbors. The World Happiness Report considered the levels of social cohesion and found, unsurprisingly, that all five of the Nordic nations scored highly. They received very high marks not just for socializing, group activities and such, but also for trust of their neighbors. If you remember my earlier post on hygge, we talk about how the concept encourages simplicity, lack of ostentatiousness, it is about making others comfortable and establishing cohesion together.

On the other hand, citizens of other countries may fall into the trap of comparing themselves to their neighbors and falling victim to envy. Part of the American dream is not just about having enough but about having more than everyone: having a bigger house, or a nicer car than your neighbor, keeping up with the Jones’s if you will. We can remember from my post about the Dalai Lama, that unhappiness is rooted in comparing oneself to others. In some cultures, this comparison seems to be almost a natural part of our national ethos, while other places, like the Nordic states don’t have this problem. I think if you consider the typical American, we all think that we are destined to be a millionaire, we just haven’t made our big break yet. This delays our happiness or gratification until some future point in time which may never come to be. The Nordic countries have mastered the art of being happy and grateful in the present, and not in postponing that gratification.

I think that looking closely at the Nordic nations can provide valuable insight to other nations as they seek to improve their own governments and societies to create happy, productive, and supportive societies. I know that this is easier said than done in reality, but I sincerely hope that the leaders of the world look to these nations as they consider how they can properly care for their citizens and how they can build meaningful and happy lives for all. 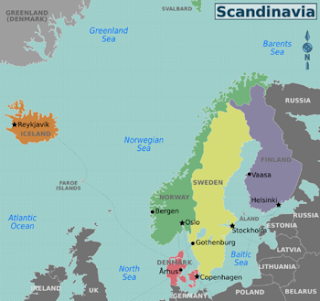 Click the links below for some of the UN’s reports.