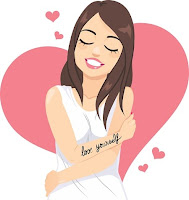 If you won’t be on your own side, then who will. More importantly, why would they? If you, and who knows you better than you, do not love yourself, then why would anyone else?

Many of us struggle to love ourselves. Isn’t it ironic that love can come so easily to other people: our parents, our children, the beloved teacher whom we have never met that is battling cancer, a story just ran by the news? If you’re empathetic like me, you can literally be moved to tears with compassion and care for others, yet when it comes to loving our self, we struggle.

I know my fight with self-love has been long, fierce, and in many ways continues to this very day. At my low moment’s I’ve called myself weak, pathetic, unmotivated, a waste of potential, undeserving and more. I sincerely hope that you have never felt this way about yourself, but chances are you have.

Why are we so hard on ourselves? “On My Own Side” is a book by Dr. Aziz Gazipura, a psychologist, seeks to answer this question and attempts to help us find a greater sense of happiness and love for our self.

Dr. Gazipura describes a critic within our own head. We can understand this critic as that negative voice, which though part of our own consciousness, so often seems like an entirely different entity. Though it may often seem otherwise, the role of this critic is to protect us. That negative voice is put there for the purpose of keeping us safe. By constantly putting in negative feedback, it prevents us from taking a chance, from daring too greatly or putting ourselves in a position where we may embarrass ourselves. By keeping is in our comfort zone, the realm of the familiar, it prevents any potential physical and more importantly, mental distress. Even though the status quo of the familiar may be a deeply unhappy place, at least it is known, and as such it is safe.

I will give you one example of my own (hard to choose one of the many, many, possibilities of me embarrassing myself. 1) During my first week at college, I was determined to make a splash and establish myself as one of the best and brightest on campus. In my international studies class, our professor asked a question. Most of the class was doing their best to keep their eyes open. Not me, I was alert and engaged. I looked around quickly and decided now was my moment. I raised my hand and simultaneously gave my answer. A sudden fire alarm could not have made the heads of my classmates pop up quicker. The professor stared at me silently, while every head turned in my direction. I was dead wrong. It felt a bit like Billy Madison’s failed response during the debate at school: https://www.youtube.com/watch?v=OZeHq7J9aHM

From that point on I never spoke up again in that class. Nor in any class for that matter. I think the next time I willingly gave input to a class discussion was during graduate school, some 6 years later, where I was in a different place, surrounded by different people, and finally feeling safe.

From that moment, whenever I would feel like answering, my critic would remind me of that awful moment when I was so horribly wrong: nervous sweats, clenched fists and toes, the whole world seeing me as a giant fool. Chances are that nobody in the classroom remembers that moment, everybody has been wrong before, right? Well, my critic remembered, and reminded me of how awful that moment was, so rather than allow me to speak up in future discussions, even when I had the answers or valuable input, I was silenced by my critic. The voice kept telling me I was stupid, wrong, that I had nothing to add and that I shouldn’t even try. This was its way of protecting me.

I bet that any of you reading this can think of other examples, and probably more serious ones as well. For example: asking your boss for a promotion, asking your crush out, taking a chance and starting your own business. When faced with decisions like this, our critic comes out, and often recalling some sort of perceived in trauma, which may or may not be completely relevant, it convinces you not to go for it. It wants to protect you from the shame of trying and failing.

More than this, the critic will heap shame on us at any chance for anything. It will remind us when we look in the mirror that we are ugly, if we miss a workout it will call us fat, lazy, and unmotivated, if our boss criticizes a report, it will convince us that we are stupid and ought to not even try. What’s the use, right?

I want to pose the question that Dr. Gazipura asks of his readers. Would you treat one of your loved ones this way? If your girlfriend decided to skip the gym and instead have a pizza, would you call her a whale and shame her? I hope not. If your son answered question wrong in class, would you call him a dumb ass? If your friend applied for a job and got rejected, would you tell him it was because he was a lousy candidate and should have never applied in the first place?

When it comes to silencing your critic, and learning how to be happy in yourself, you have to be on your own side. Of all of what Dr. Gazipura said, the most important to me was in talking to yourself the way you talk to those you love. There are no requirements for this love. You treat your loved ones with kindness, respect, patience, and accountability. If you start practicing these qualities with yourself, the way you do with others, you will be on your own side and you will be able to find happiness.

Understand that the critic is there to provide security in an unknown world. It acts from the perspective that the evil you know is better than the evil you don’t. while it may keep you in a miserable thought cycle, your critic believes it is protecting you from the unknown. When you learn to start talking to and understanding your whole self, including your critic, you will be able to let go of these fears and this pain and get busy living, daring greatly, and being happy.

Learn to think and speak nicely with yourself, be on your own side, live boldly, and start being happy.

I highly encourage you to check out Dr. Gazipura’s Book: 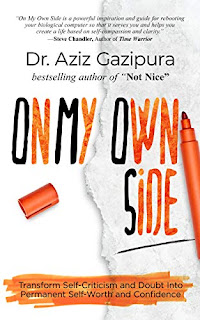