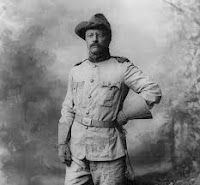 Theodore Roosevelt was born on October 27, 1858 in New York. Until his death roughly 60 years later he would go on to live one of the more interesting lives I have ever come across. During his life, he would serve as New York City Police Commissioner, Assistant Secretary of the Navy ( a position he would resign so that he could serve in a combat role during the Spanish American War), Lieutenant Colonel in the military, Governor of New York, Vice President of the United States, and finally 25th President of the United States.

Perhaps more impressive than the offices he held are the adventures he held along the way. He was an avid boxer, big game hunter, horse rider, lived as a Cowboy in the west for several years, and after his presidency took a trip through the depths of the unexplored Amazon (a trip that would prove fatal for many).

What this post is intended for, is to highlight the role that exercise played in Theodore’s life and in helping him go on to live a life that made HIM happy. I have previously mentioned the role that exercise plays in happiness: leading to increased neurotransmitter activity and overall sense of happiness. I have also previously discussed contentment, how do be happy at peace, and to not want. Theodore Roosevelt was definitely a man consumed by ambition, and was not very good at sitting still and doing nothing. What I want to emphasize though is that he led a life that made him happy according to his own understanding. Throughout this and all my posts, it is important to remember that ultimately, we are responsible for our own understanding of happiness, and for finding what it means to us. Theodore Roosevelt did just that, and exercise was at the core of it.

From a very early aged, Theodore Roosevelt loved activity. Letters, journal entries and such exist describing a young boy obsessed with nature, often out in the woods collecting bugs, swimming in streams, or traveling the world with his family. These same letters and journal entries, many of which come from Roosevelt himself who started journaling at a young age, describe a sick and frail boy, often confined to bed due to illness, and thus unable to pursue that which made him happy.

He was diagnosed with asthma at an early age, and would frequently experience “coughs, colds, nausea, fevers, and a congenital form of nervous diarrhea which the family euphemized [sic] as cholera morbus,” (Morris). As he grew, his love for activity, the outdoors, and adventure would grow while his health saw little improvement. The family doctor described him as “a bright, precocious boy, but by no means robust,” (Morris).

By this time, Theodore’s continued bouts of illness were creating a seriously negative effect on his enjoyment of life. His father took note and would inspire him thusly, saying to his son: “you have the mind but you have not the body, and without the help of the body the mind cannot go as far as it should. You must make your body. It is hard drudgery to make one’s body, but I know you will do it,” (Morris).

From this moment, Theodore took control of his life through physical activity. His body was not naturally healthy so he set out to make it so. He began lifting weights, running, and swimming, not just for fun but for the purpose of strengthening himself. His sisters remarked how we would go outside and exercise for hours on end, determined to rise his body to the purpose for which he wanted it. He himself even kept a workout log in his journal, describing hundreds of pushups, dips, chin-ups, jogs and more done every day. Just looking at the volume makes me sore. 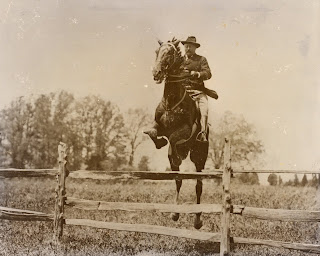 It worked. From that day forward, there is barely any mention of sickness mentioned in either Theodore’s, or any of his family’s journals or letters. I am sure that the journey was not without setbacks, but the point is, is that he was successful in his aim.

To conclude why I think this is worth discussion on a blog about happiness, is that Theodore’s efforts allowed him to make himself happy. Happiness means something different to each of us, and in order to find happiness, we must look within ourselves and find what we are looking for. Theodore Roosevelt knew that the outdoors, adventuring, hiking, hunting and such were what made him happy. When circumstance tried to limit his ability to pursue this happiness, he took control. This was a perfect example of focusing on that which is within our control. Luckily for Theodore, his physical health was something he could control, and so he did, and as such he was able to live life on his terms, according to the way he intended.

Exercise has played a similar role in my pursuit of happiness, building my self esteem, and letting me live an adventurous and active life. Maybe it doesn’t play the same role in your life, but I do believe that maintaining a certain level of physical health will go a long way to improving your overall sense of happiness. Regardless, I encourage you to search within and recognize what happiness means to you, and get busy manifesting it. 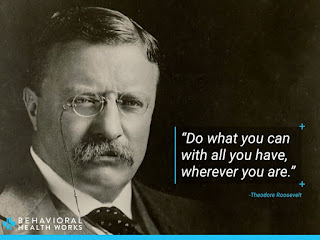 I leave you with a quote of Roosevelt: “do what you can with all you have, wherever you are.” Theodore Roosevelt was determined not to let circumstances stop him from leading the life he wanted, and he did all he could to pursue his understanding of happiness. You can too.