Yesterday I came across an interesting Ted Talk by Dan Gilbert, a Social Psychologist at Harvard University. The talk was entitled “the Surprising Science of Happiness”. I wanted to write today about what I learned in that talk and to tie it in with a number of thoughts that I have encountered over the years of reading Stoicism.

Dr. Gilbert began with a discussion about the human brain and how it gives us an ability possessed by no other species on earth. Over the last several hundred thousand years, the human brain has grown immensely, building new structures with new functions in the process. The focus as it relates to Dr. Gilbert’s teachings was on the frontal lobe, specifically the prefrontal cortex. Dr. Gilbert described the prefrontal cortex as a simulator, allowing humans, to predict or think about the future. This originally developed as an evolutionary trait aimed at improving odds of survival, giving humans the ability to reflect on cause and effect, on consequences both good and bad for their actions.

While this tool was valuable as we navigated a world full of predators and danger, it is in many ways a major factor in both our anxiety and happiness today. One of the things we admire so much about dogs and other pets, is that they always seem happy and able to enjoy the moment. Part of this is that their brains lack the ability to clearly formulate a vision of the future, and as such they are concerned more with the present, the here and now rather than any possible future.

Dr Gilbert calls the human ability to imagine the future prospection. So much of human worry comes from this ability to think prospectively because we imagine a later time where such and such may come to pass. Dr. Gilbert says that “later” isn’t real, its just a figment of the human imagination. Through his research he has come to recognize that we often predict future states of mental wellbeing and happiness incorrectly. Things that we expect to bring us pleasure often do not bring the amount of pleasure we hope they do. For example, a budding businessman may want to make a million dollars. They think once they have that million dollars, then they will be happy. What typically happens to those who get that far is they realize it isn’t enough. They aren’t as happy as they thought. So, then they decide they want 5 million dollars. Guess what, once they have that it still isn’t enough, so they are trapped in the negative state of always wanting more and never being content.

A similar effect is observed when we contemplate future states of suffering. As with predictions of future states of happiness, we tend to overestimate the severity of negative circumstances, realizing that once they come to pass, our anxieties and fears were overblown. It reminds me of a quote from Seneca the Stoic who said: “we suffer more often in our imagination than in reality,” and I couldn’t agree more. Have you ever caught yourself dreading an event, maybe it was a presentation in front of your board that you were terrified about? You imagine standing there and stammering like an idiot while they all stare at you confusedly before telling you to pack your desk and leave. Instead, you deliver a great speech with very few if any issues and they applaud your work, congratulate you and ask you to apply for a promotion that has just opened up. Or even if it does go poorly, is it not something you can endure? 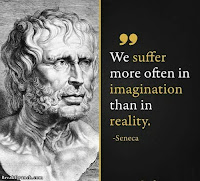 What we fear rarely comes to pass in the way we imagine, and even if it does, we are more resilient as a species than we give ourselves credit for. Dr. Gilbert has actually conducted studies where he asks respondents to state how happy they would be if they won the lottery and to state how unhappy they would be if they had an accident and became a paraplegic. To generalize it, the results were, unsurprisingly, that they would be exceptionally happy to win the lottery and exceptionally unhappy to said and predicted the same. Interestingly enough, Dr. Gilbert has actually interviewed large numbers of each group and discovered that one year following their life changing event, winning the lottery or becoming a paraplegic, that the two groups were almost identical in perceived happiness to one another. Surprising no? I think that this is the result of two things. One: our misguided prospection and two: our underestimation of our own mental resilience. To me it echoes a message from Epictetus: “train my mind to adapt to any circumstance… this way, if circumstance takes you off script…you wont be desperate for a new prompting.” As is in line with much of Stoicism, Epictetus is reminding us to recognize that certain things are out of our control, and rather than seeking to control things, we ought to seek the power to adapt and deal with.

Human beings are actually remarkable at adapting. If we remember Darwinian Evolution, we recall that survival depended on a species’ ability to adapt and overcome. While our prefrontal cortex may be often wrong, we are remarkably adept at adapting to new circumstances. This is true of our ability to be happy. Dr. Gilbert describes two forms of happiness: hedonic happiness and synthetic happiness. Hedonic happiness is a response, a reaction to external events like receiving a gift, achieving something. Synthetic happiness is a more calm and reserved happiness and one that is manufactured in the brain independent of external events. Synthetic happiness arises from the body’s innate desire to be happy, which may surprise us given the prevalence of anxiety and depression, but happiness actually is natural and healthy too for that matter, we have just been de-conditioned from recognizing it. This is a fact that the modern world system takes advantage of, convincing us that we need to buy more, spend more, achieve more in order to be happy. As Dr Gilbert says: a mall full of Buddhist monks is no good. The invisible hand, so to speak, requires legions of unhappy people convinced that they need more stuff to be happy. Dr. Gilbert’s demonstration that lottery winners are no happier than paraplegics is a perfect example of why that mentality of hedonic pleasure is false.

Synthetic happiness is the opposite. Dr. Gilbert looks at it scientifically, but the same phenomenon has been discussed by Buddhists, Stoics – whom though they lived thousands of years ago were no different than us in terms of brain evolution, and many others, who think about the concept at a more spiritual or emotional level. Interestingly enough, choices and options for the future play a role in our anxiety about the future. I know a cause of anxiety in my life has always been what am I going to be when I grow up. I am blessed with the opportunity to do almost anything I want, but the idea that any choice I make could be wrong drives me nuts (yes I am 32 and still figuring out what I want to be when I grow up, I’ll let you know when I figure it out.) Dr. Gilbert conducted experiments wherein subjects were given a choice of which of their photographs they developed they would give up. Those who were given no choice were actually much happier about the situation than those who were given a choice, felling anxious about whether they were making the right choice., There was nothing wrong in either scenario in the present, but they were stressed about a future state of regret. 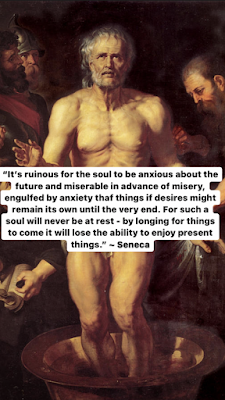 I think this reinforces the idea that one of the best ways to be happy is precisely what the stoics preach, which is to recognize that certain things lie outside of your control, and therefore aren’t worth stressing about. Instead of wishing or hoping they don’t come to pass, instead wish for the resolve and strength to endure. Happiness comes from being grateful for what you have in the present, not craving what you don’t have for the future. Our brain is truly remarkable about being able to make us happy, if we can learn to be in the present and be grateful. Happiness is not a new vacation home in the future, and we don’t need to worry about what injury or illness might befall us in the future. If we can be right here in the now, we can be happy. To close with another quote from Seneca: “It’s ruinous for the soul to be anxious about the future and miserable in advance of misery, engulfed by anxiety that the things it desires might remain its own until the very end. For such a soul will never be at rest— by longing for things to come it will lose the ability to enjoy present things.”