Today I want to write about opinions. One of the things I have learned through my study of various philosophies and texts, as well as learned through personal experience, is that much of what we view as bad or wrong all comes down to opinion. Generally speaking, it is our opinions of things that influence our happiness. This works in two ways: 1, our perception, or opinion, of events determines whether we think of things as good or bad; 2, rather than trusting our own opinion about things concerning our self, we listen to the opinions of others and allow them to influence our feelings. Overall, in my opinion (ha – ha), opinions tend to create a negative perception of the world. In this post I intend to explore the way opinions influence our emotions, and do my best to share advice, with some help of people much smarter than myself, that will help us be less concerned about opinion.

The first sort of opinion I want to discuss is our own opinion of events. The first thing we need to do is recognize that events are neither good nor bad, they simply happen. Only in our mind do we perceive neutral events, things that simply are, as good or bad. As Epictetus, one of the most well-known Stoics says: “it isn’t events that disturb people. Only their judgements about them.” Let’s think about a few examples. Have you ever lost a loved one? I think this can be considered one of the most painful experiences that humankind feels. Most of us would say at first thought that this is clearly something bad. Well, it does cause us grief but the event itself is neither good nor bad. First of all, it was not a conceived intent, it was simply a natural occurrence of the universe. Things that live eventually die. This is the way of things. Our opinion tells us that it is a bad thing. How can we stop thinking of it as bad? First, recognize that this it is not only completely natural but destined to happen, we will all die one day. We also need to shift our focus. Sure, we may be sad for the departed, but instead maybe we should consider how much better the world was made for the life of that person. If we can learn in such circumstances to either become neutral and not have an opinion, especially of things that lie outside of anyone’s control, then we cease to be harmed by opinion. Or better yet, we can shift our focus off of the negative and onto the positive. Strength lies in being able to find the positive in anything. To quote Epictetus once more: “remember that nothing but opinion is the cause of a troubled mind and uneasiness.” Learn to do away with opinions, and you will cease to be harmed.

It isn’t just our opinions of events that do us harm. Reflect on how often we have let the opinions of others persuade our thoughts, particularly with our understanding of ourselves. Have you ever been walking along the street, feeling good, enjoying the day. You meet up with some friends and someone says something off-putting about your appearance like: “what is wrong with your hair,” or “are you sleeping ok, you look awful?” Suddenly the birds stop chirping, the sun hides behind a cloud and what once was a beautiful day is now bleak. Your happiness is shattered, and you feel like shit. Why? Because you let someone else’s opinion matter to you. You felt great about the way you looked, you loved your new hair, but now because some so-called friend had something negative to say, you feel negative too.

Marcus Aurelius said: “I’m constantly amazed by how easily we love ourselves above all others, yet we put more stock in the opinions of others than in our own estimation of self. . .. How much credence we give to the opinions our peers have of us and how little to our very own!” It makes me laugh a bit to think of the most powerful man in the world 2,000 years ago, Marcus Aurelius, the emperor of Rome, dealing with the same issues that plague us now. I picture him rocking a sweet new toga, feeling fine, and then one of his advisors says: “dude, what is with that toga, you look fat.” Or maybe he was feeling wise after a new proposed law and someone rains on his parade saying: “this law is stupid, it will only make the situation in Germania worse.” Thus, prompting him to go and write the above in his meditations. He is so right though, why do we let the opinions of others matter so much.

He is absolutely correct though. Doesn’t it seem a bit foolish to let other people’s opinions have so much power and influence over us. I have been guilty of this many times and I am sure you all have too. We all want to be liked and care what others think, if you don’t then congratulations on your liberation, that must be amazing.

It is easier said than done but I think an important step is to trust yourself and value your own opinion above others. This is selfish, by definition anyway, but ultimately your thoughts and your opinions ought to matter more. You are you, this is your life. Yes, other people matter but ultimately, we are all leading our own lives and the only opinion that should matter is our own. Think about that the next time an off-hand remark happens, or something occurs that causes you distress. Fight the urge to allow yourself to feel attacked. Brush off the opinions of others and continue being your amazing self. To end with a brief snip of Theodore Roosevelt’s so-called Man in the Arena speech: “it isn’t the critic who counts… the credit belongs to the man who is actually in the arena.” We are all the man (or woman or however you choose to identify) in the arena of our own lives. Everyone else is just a critic. Yes, some critics matter more than others, and I think a life well lived is one that invites others to share it. But at the end of the day, we are all in the arena in our own lives, and the opinions of our critics don’t matter. 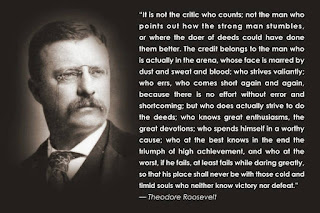