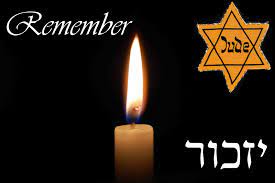 I feel ashamed for not knowing this earlier but today is Yam Hashoah, the day that the Israeli’s remember the memory of the 6 million Jewish people and the 5 million other victims (homosexuals, gypsies, the handicapped and more) who lost their lives during the holocaust. No detailed explanation is needed to recall the holocaust, nor will one be given. This was arguably the greatest atrocity ever committed in the history of humankind, and I truly hope that never again in our future do we ever even approximate the level of brutality and cruelty as we did during the holocaust.

Coincidentally, I am currently reading Viktor Frankl’s book “Man’s Search for Meaning.” Frankl, a Jewish man from Vienna, was a neurologist and psychiatrist who survived the horrendous experience of the holocaust. Man’s Search for Meaning is his book wherein he recalls the horrors of camp life. More importantly perhaps, he applies a psychiatrists mind to the situation and discusses the mentality of the ordeal. He describes in great detail the physical and mental suffering, and how it broke so many, sadly causing many to lose their will to live. He also talks of triumph. How there were those who were able to fortify their minds in the face of suffering, and strengthen their resolve, willing themselves to endure and continue on. This post will discuss Frankl’s observations on how one can endure the worst forms of suffering imaginable. By looking at people like Dr. Frankl, who were able to endure such intense suffering, we can apply these lessons and learn how to fortify our own minds against any challenge life may throw our way, though I am both optimistic and hopeful that such an atrocity as the holocaust will never be seen, nor on such as grand a scale again. Before carrying on, I would like to add, that this in no way is meant to diminish or admonish those who succumbed in any way, shape, or form. What they faced was an unimaginable horror, and I praise the fortitude of those who survived not to say that they were better than those who didn’t, but only because the fact that anyone could endure at all is so incredibly remarkable.

The first trait of those who were able to maintain their strength and will to live, according to Frankl, was their mental constitution. Physical suffering was the norm for everyone and age, constitution, athletic ability and more had little to nothing with who was able to survive. The perpetrators of the holocaust made physical suffering the norm, robbing their victims of their sense of personhood and physical security. Though they often tried, the one realm where the Nazis could not penetrate their victims was in their mind. Try as they might, those who could maintain their presence of mind could still cling to some sense of personhood and confidence. “Man can preserve a vestige of spiritual freedom, of independence of mind, even in such terrible conditions of psychic and physical stress. Everything can be taken from a man but one thing: the last of the human freedoms—to choose one’s attitude in any given set of circumstances, to choose one’s own way,” – Viktor Frankl.

This was likely far more easily said than done, when one’s physical world was the concentration or death camps of the holocaust. How exactly would one make sense of all of this suffering. What reason was there for choosing a positive attitude when their was nothing but death, disease, and misery abound? According to Frankl, the best way to deal with the suffering was by recognizing that suffering is an inevitable aspect of life. That though this suffering was greater perhaps than any previously seen, it was an opportunity and a challenge to grow spiritually, getting in touch with his deepest self and bearing the suffering proudly as a burden. I find this impossible to even comprehend yet this is exactly what Frankl and many others did. To quote Frankl: “there was an opportunity and a challenge. One could make a victory of those experiences, turning life into an inner triumph, or one could ignore the challenge and simply vegetate, as did a majority of the prisoners…. When a man finds that it is his destiny to suffer, he will have to accept his suffering as his task; his single and unique task. He will have to acknowledge the fact that even in suffering he is unique and alone in the universe. No one can relieve him of his suffering or suffer in his place. His unique opportunity lies in the way in which he bears his burden.” 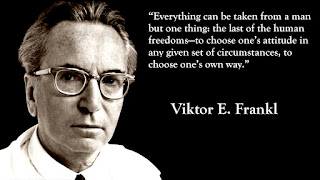 There was nothing that the unfortunate prisoners of the concentration camps could do. Many of them endured for years on end, suffering immensely throughout. Such endless pain and fear would present an insurmountable challenge to anyone, and many sadly did succumb. Only those who were resilient in their mind and were able to embrace their suffering made it out, with the help of the blessing of luck in many cases. It recalls the quote of Marcus Aurelius, of whom Frankl was a great fan, saying: “You have power over your mind, not outside events. Realize this and you will find strength.” Nobody would choose to live through such a time, but sadly many did. Those who were able to embrace this ever so difficult lesson were stronger for it.

There is one other theme that Frankl attributed as coming to the aid of those who ultimately survived. That is love. “The salvation of man is through love and in love,” writes Frankl. Frankl attributed much of his ability to endure to the loving thoughts and memories he carried of his beloved wife. Tragically, Frankl was unaware that his wife had lost her life not long, after their separation into separate, segregated camps. He would not find this out until after the end of the war and the liberation of his camp in 1945. Nevertheless, he said “Had I known then that my wife was dead, I think that I would still have given myself, undisturbed by that knowledge, to the contemplation of her image, and that my mental conversation with her would have been just as vivid and just as satisfying.” As Nietzsche said “he who has a why to live, can endure almost any how.” Frankl’s why was to carry on with the memory of his wife, Tilly Grosser, who’s love gave him the strength to carry on through the darkest tragedy in human history.

The holocaust against the Jewish people and others perpetrated by the Nazis will go down as humanity’s darkest moment. Today is a day for remembrance of for those who lost their lives in that terrible instance of human hate, anger, and fear. We cannot allow bigotry, xenophobia, racism, and hate to continue to thrive in our midst lest we ever allow something that horrible to happen again. If there is any positive that can be taken from this it is from men and women like Viktor Frankl, whose experiences through this tragic time serve as a guidance to how we face our own suffering, though it will never approximate what was experienced by the Jews during the holocaust. Frankl’s example also reminds us to cherish our loved ones, whose presence in our lives give meaning and can act as a guiding light and uplifting thought through even the most terrible of times.

To our six million brothers and sisters

murdered because they were Jews,

grant clear and certain rest with You

in the lofty heights of the sacred and pure

whose brightness shines like the very glow of heaven.

Forever enfold them in the embrace of Your wings;

secure their souls in eternity.

Adonai: they are Yours.

They will rest in peace.