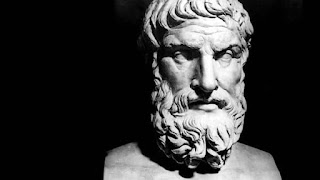 Today I want to talk about one of the most commonly misunderstood branches of philosophy, Epicureanism. Epicureanism takes its name from its founder, Epicurus, who lived in the 3rd Century BCE. Epicureanism is often, wrongly, considered as the antagonist to stoicism. Where stoicism teaches moderation and humility, epicureanism teaches hedonism and indulgence. This couldn’t be farther from the truth. The only way one could possible, make such an error would be to do the briefest of superficial observations of epicureanism and no more. This post aims to explain the true meaning of Epicurus’s teachings and to discuss not only the similarities to stoicism, but also why the epicurean philosophy is a respectable way to consider the universe. Keep in mind of course that Epicurus’s own life came just after the lives of Greece’s most influential philosophers: Socrates, Plato, and Aristotle, whose moral influence clearly shaped the views of Epicurus. Ergo his philosophy is not a diametric opposition to stoicism but rather a relative sharing a common origin in the School of Athens.

To Epicurus, happiness was the absence of pain, both mental and physical. This is where the common misconception arises. Some would believe that seeking of a relief from pain would lead one to drunken orgies, decadent banquets and such. While Epicurus was a great believer that one should enjoy the niceties that life offers, he constantly preached moderation and gratitude, rather than reckless hedonism. He even used the metaphor of a banquet to illustrate his point: “Treat life like a banquet: do not mourn what passes, do not take more than you need, and don’t yearn for what is to come, enjoy the present instead.” There is great wisdom in this approach. It echoes the ideas of stoicism, or rather precedes them, by acknowledging our helplessness to control external events. We have no control over the past, so why should we lament it. To keep with his metaphor of a banquet: the crab cakes have passed, instead enjoy the oysters that you now have. Don’t look forward to the chocolate cake that comes later, if you do that you’ll miss the opportunity to enjoy the oysters. And who can say that that cake will even come? What if the banquet hall catches on fire and the oysters are the last dish you get. Enjoy the present instead.

With anything more than a cursory glance it becomes evident that Epicureanism really isn’t that far off from other religions or philosophies such as Stoicism which we have mentioned, but also Buddhism, Christianity, and Islam to name a few. There is an apparent lack in epicureanism to the acknowledgement of a deity, in the traditional sense anyway, though there is clear belief in a higher power. Epicurus was remarkably ahead of his time by theorizing that the world was comprised of invisible particles, which he called atoms, that formed the constitution of all matter both living and otherwise. He believed that the existence of the universe was simply a fortuitous confluence of science rather than the machination of a deity or deities, which made him many enemies from the traditional Greek theologians.

What Epicureanism shares with Stoicism, Buddhism, Christianity, and Islam is an acknowledgement of a higher power to which we are all supplicant to. To rail against this higher power, whether it be god or simply fate, would be futile and would only introduce greater suffering. It is also about gratitude for whatever that higher power may provide. Epicureanism is about enjoying what you are given and thinking nothing of that which fate chooses not to give. “Nothing is enough for a man for whom enough is too little. Not what we have but what we enjoy constitutes our abundance.” Control what you want, and you will have everything that we want.

It is easy to see how one could misinterpret Epicureanism: “choose what creates pleasure over pain, satisfaction over angst.” One might think that this suggests: have all the sex, drink all the wine, indulge, indulge, indulge. What it really means, particularly in the light of his broader work, is don’t want what you don’t have. Enjoy that which you do have. Put aside your cravings not just for food and indulgence, but also power, fame, recognition. If you have those, enjoy them. But how much energy is wasted craving for that and never enjoying of its fruit? Remember that in his philosophy, all life is just a random assortment of atoms beyond our power to understand the organization of which. To rave with anger and madness about what you don’t have would be foolish, who would listen? What good would it do? Enjoy what blessings life gives to you, but enjoy in moderation, and appreciate while it lasts. For nothing is guaranteed to last forever. “Do not spoil what you have by desiring what you have not; remember that what you now have was once among the things you only hoped for.”