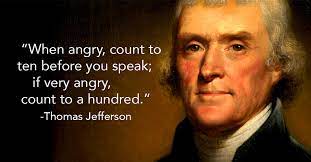 I want you to reflect and think back to a time where something happened that caused you to lose your temper. How did it feel in the act of losing your temper? How did you feel afterwards? If you lost your temper at another person, how did your relationship with that person change in the short-term and long-term. Most of us can probably come up with more than just a handful but for now let’s focus on one or two. Without going into great detail on the specific instances of losing my temper, I will share my answers to those afore asked questions. In the act of losing my temper I feel out of control. It feels like a massive dam of water has been opened up through a crack, and now that is open, I am powerless to stop the flow of anger, hatred, and malice flowing out of my mouth like a tidal wave. Afterwards I feel shame and sorrow. Shame because behaving that way doesn’t accurately represent who I am or who I want to be as a person. Sorrow because I have caused pain in another, through what in most cases is just a misunderstanding. Chances are that most of us have felt like this at many points in our life, where we wished we hadn’t lost our temper or lost control. This post is about how to gain control over ourselves and resist the temptation to explode into emotional outbursts and do something we might regret.

What is it that makes us lose our temper? Maybe a person cuts us off in traffic, forcing us to slam our breaks and spill our morning cappuccino. F – that person right, what sort of inconsiderate self-absorbed jerk would do that right? Or maybe a friend makes a remark that really gets under our skin and makes us mad. Time to put this friendship on notice, let them know you don’t give 2 shits what they think and then show them the silent treatment for a few weeks. Sound like anything you’ve done before? No, just me? Maybe I need to step up the anger management a bit more.

Let’s revisit those two scenarios, scenarios I threw out because my guess is we have probably had something similar happen to us. Let’s take the example of getting cut off in traffic. Anybody who does that must be a jerk right? Total dick move. Ask yourself this though, how many times have YOU cut someone off in traffic. My guess is you weren’t doing it to be a jerk right? No looking and saying you know what, that person looks too happy today, lets ruin their day. It was probably an accident, right? Of course, you wouldn’t intentionally do something like that. Guess what, the same probably applies to the person who cuts you off on any given day. Maybe they were visiting from out of town and are intimidated by the traffic and make a mistake in judgement, or maybe they just spent 24 hours working a double shift at the hospital and are doing their best to get home and rest before they go do it again tomorrow. Let’s be a little more understanding next time. Yes, it could be a close call but if it just takes a quick tap of the breaks, no foul. Everybody goes home.

What about that thing your friend said to you. No good friend would ever talk to you like that right? Clearly this person is not worth being friends with and we should start distancing ourselves. OR, just maybe they said something meaning it as a joke because they knew you wouldn’t take anything they say that personally, trusting that you’d consider the source – that this is a close friend who cares about you. Maybe they had no idea that what they said bothers you because you internalize it and never speak about it because you’re too ashamed, even though this is a person who has your best interest at heart. Trust your instincts that made you friends with this person from the get go. If it did bother you, talk to them about it and I am sure they will apologize and have your back moving forward. Or, recognize that maybe you just need to stop being so sensitive and maybe get a little extra sleep, so you don’t bite people’s heads off. No need to go nuclear over something like that. As Marcus Aurelius says: “

Truth is, most of the things that make us lose our temper just aren’t worth it. Even in the case of truly bad things, rarely is the appropriate response to have an emotional outburst, scream, break things, and act insane. Sometimes our emotional response of anger makes things worse than they were before and can become difficult to amend. As Marcus Aurelius says: “How much more harmful are the consequences of anger and grief than the circumstances that aroused them in us!” Better to take a pause, allow the emotions to subside and think rationally before acting in any case. One of Thomas Jefferson’s 10 rules for life, which I have previously posted about, was “when angry count to 10 before you speak. If very angry, count 100.” Simple and classic advice. Jefferson was wise enough to recognize that whatever made us angry and want to have an outburst probably won’t have the same effect if we just stop and take a few deep breaths while counting to 10. Even if we still find ourselves angry after which time, hopefully we can at least work through our anger in a constructive and meaningful way rather than with an outburst. 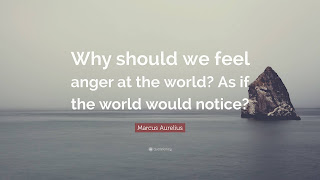 Some things happen that have nothing to do with other people, those things aren’t worth stressing over because there is nothing that can be done. You can scream and beat your chest all day, but nature will take no notice. For those things that happen with other people, know that you can’t control other people, but you can work with them to prevent situations that may cause anger. Much of what causes us anger isn’t necessarily circumstance or events but rather our own perceptions. As the Dalai Lama says: “whether we are feeling happy or unhappy at any given moment often has very little to do with our absolute conditions but, rather it is a function of how we perceive our situation, how satisfied we are with what we have.” We can’t control what happens in the world and we cannot control what others may do or say to us, but we do control our response. Choose to remain unharmed and you shall be unharmed. Do not perceive yourself as a victim but rather take such things as they come and brush them off. As Marcus Aurelius said: “And why should we feel anger at the world? As if the world would notice!” Life is going to keep on whether you get angry or not. Best to stay positive and remain un-angered.

For those events where we feel wronged by another person, remember the inherent connection we share with all our fellow humans. One of the tactics I have employed since first reading The Art of Happiness several years ago, was to do my best to always maintain compassionate attitudes towards others. This has the effect of finding it harder to react with anger or hatred to anything, instead just trying to understand that the source, that person, is human too just trying to do their best to navigate life. The Dalai Lama says:

If you maintain a feeling of compassion, loving kindness, then something automatically opens your inner door. Through that, you can communicate much more easily with other people. And that feeling of warmth creates a kind of openness. You’ll find that all human beings are just like you, so you’ll be able to relate to them more easily.” If someone says something unkind, I recognize that there goes a person just like me, maybe they said what they said because they are insecure, or maybe they did what they did because they are scared. Don’t take it personally but try to recognize that there goes another human just like you. Forgive easy and don’t take things personally. Nothing is as bad as it seems and ultimately our decision to be angry hurts only us. To end with one more quote from the late great Emperor Marcus Aurelius: The nearer a man comes to a calm mind, the closer he is to strength.” 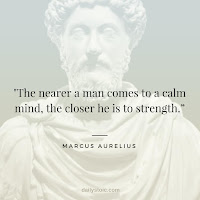