Tuesday April 13 was the first day of the Islamic holy month of Ramadan. Ramadan is a celebration and a time for mindfulness from the Muslim faithful, in recognition of the prophet Mohammed’s revelation from the angel Gabriel, who gave to Mohammad the word of God (Allah) which Mohammed then gave to the people through the holy scripture, the Quran. Ramadan is marked by fasting from sunrise to sunset, so that the Muslim people will take time to ignore worldly pleasures and sensations, instead reflecting on the word of their prophet and committing their minds and bodies to living in accordance with the wishes of Allah.

Islam is perhaps the most misunderstood religion on the planet today. This post seeks to shed light on the true message of Islam, a message of kindness, peace, and gratitude. Too often we see mankind using some misguided sense of divine purpose to commit atrocities upon the world in the name of religion. Islam has seen its fair share of abuse and misappropriation, but when we consider the truest form: the lessons of the Quran and the teachings of Mohammed, we realize that Islam is a beautiful religion aimed to create harmony and foster peace and love throughout the world. This post will highlight the true beauty, love, and happiness which Islam was meant to bring.

One cannot fully understand Islam without understanding the world from whence it came. Islam originated from what is today Saudi Arabia. At the time, Arabia, as it was then called, was inhabited and ruled by various factions or tribes called Quraysh. Life was harsh in this desolate land and the Quraysh had adapted a toughness necessary to thrive in such an environment. Among the core values of the Quraysh was the concept of Muruwah, which meant: “meant courage, patience, endurance; it consisted of a dedicated determination to avenge any wrong done to the group, to protect its weaker members, and defy its enemies.(1)” Muruwah was about pride, strength and often consisted of haughty displays of wealth and power. Karen Armstrong, one of Mohammed’s modern day biographers said: “Mohammed believed that the Quraysh had jettisoned the best and retained only the worst aspects of Muruwah: the recklessness, arrogance, and egotism that were morally destructive and could bring the city to ruin (1)” It is in this setting, a setting of warring egotistical tribes who would fight to the death over perceived insults, prey on the weak, and gloat with pride, that Islam would arise.

Islam is marked by two important rituals of prayer (salat) and alms giving (zakat – pure offering). These two acts are among the most significant in all of Islam for the serve as reminders to humble oneself and act with kindness. The act of salat, which the devout perform 5 times daily, involves facing Mecca, the holy city of Islam, and touching one’s head to the ground as a form of surrender. This act would have been considered heinous by the Quraysh of pre-Islam days, but the whole act is about removing pride and ego. In fact, the very word Islam translates to surrender, with the whole purpose being to surrender oneself to a higher power and to act in accordance with the will of that higher power. The Quran says: “Every religion has its distinct characteristic, and the distinct characteristic of Islam is modesty (2)”

The zakat (offering) as well is about removing ego. Rather than prey upon and mock the weak, a good Muslim must behave like the prophet and comfort and care for the less fortunate as Allah cares for them. To quote the Quran in English: “What actions are most excellent? To gladden the heart of human beings, to feed the hungry, to help the afflicted, to lighten the sorrow of the sorrowful, and to remove the sufferings of the injured (2)” The intent is twofold. The receiving of the zakat alleviates the worldly suffering of the recipient, but perhaps more importantly it cleanses the soul and mind of the giver. In a world where worldly riches were thought to be the highest form of attainment, and to have wealth was to have everything, this is a remarkable turn of events. Now it is the giver, he who willingly parts with his or her wealth who is truly powerful. Without the ability to lose such pride, one cannot enter paradise: “He who has in his heart the weight of a mustard seed of pride shall not enter paradise(2)” Now the teachings of Mohammed are helping two fold as the poor suffer less and the well-off reckon with a more kind and harmonious way of living. “Kindness is a mark of faith, and whoever is not kind has no faith.”

Mohammed’s revelations from the angel Gabriel are important because they dramatically altered the trajectory of the Arabian world from one destined to suffer eternally amidst trivial squabbles, tribal conflicts, ego, suffering, and taking advantage of one’s neighbors. The fact that Mohammed was able to alter the course of history speaks volumes to the power of him as a prophet but also to the power of his message. The word of Allah offers a way to peace and salvation for the many and gives meaning in a sense to the suffering that is life. No longer is it the fiercest or most reckless warrior who is valued but instead: “The best among you is the one who doesn’t harm others with his tongue and hands (2)” In many ways, Islam eases suffering by removing focus on worldly pleasures and riches and instead teaching contentment with little, in offering salvation through God, his prophet, and in being grateful with little instead of wanting greatly. The Quran says: “Richness is not having many belongings, but richness is contentment of the soul,(2)” which echoes stoic virtues on not wanting what one does not have. 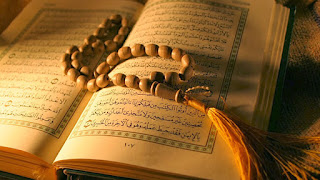 Personally, I am grateful for the occasion of this year’s Ramadan for encouraging me to learn more about the holy month and the meanings of the Islamic religion. Islam has come under much fire here in the 21st century and not without reason as terrible things have been done by those claiming to act in the name of Mohammed and Allah. As is often the case however, these people seem to act more in their own selfish interest, misrepresenting the true meaning of the religion in order to advance their own greed or pride. A closer look at the true words of Mohammed reveals that these are very likely the type of individual Mohammed would have been trying to save 1,500 years ago and not true followers. Whether one is Muslim or not, there is much value to be had by practicing kindness to others and reminding ourselves that there are greater powers at work than we can comprehend and that we are mere specks of dust in the wide cosmos. Let us all act with kindness, humility, and gratitude.