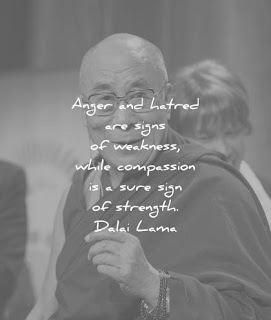 I begin today with another meditation from the Dalai Lama. This one is a way to deal with anger, the topic I want to discuss in this post. The meditation practice is as follows:

“Let us imagine a scenario in which someone who you know very well, someone who is close or dear to you, is in a situation in which he or she loses his or her temper. You can imagine this occurring either in a very acrimonious relationship or in a situation in which something personally upsetting is happening. The person is so angry that he or she has lost all his or her mental composure, creating very negative vibrations, even going to the extent of beating himself or herself up or breaking things. “Then, reflect upon the immediate effects of the person’s rage. You’ll see a physical transformation happening to that person. This person whom you feel close to, whom you like, the very sight of whom gave you pleasure in the past, now turns into this ugly person, even physically speaking.”

What the Dalai Lama asks us to do next is to visualize ourselves as that person. Remember a time in our life when be became irrationally angry, so angry that we behaved in a way that we were embarrassed. Every person has done this. It is so much easier for us to see the ridiculousness of such fits of anger when it happens to someone else, especially someone close to us. We have all acted this way and we need to be mindful of the fact that this is what it looks like when you let rage take over. I did this practice on myself when I first read it and I blushed in embarrassment, thinking how easy it was to avoid a friend or loved in in such a state, only to realize I have behaved similarly more times than I can count.

The Dalai Lama’s suggestion for getting past this sort of anger is to practice patience and compassion. Think back to Jefferson’s rules for life, where he urged us to first count to ten when angry, and if we were still angry to count to 100. The whole intent here is that time allows us to act rationally rather than emotionally. Most of the instances of losing our tempers is because we have exaggerated emotional reactions to situations that are often overblown. Think back to an example in your own life when you allowed yourself to have an emotional reaction and lost control. In hindsight you may have realized that your whole basis for anger was a misunderstanding, that you had an emotional reaction to something you misunderstood. By practicing patience in such situations we can avoid blowing them out of proportion into negative events.  We don’t just want to practice patience with ourselves but also with others. Be patient with your fellow humans, as we are all trying to live our life with as much happiness and little suffering as possible. Understand that we are all on this journey together and that it is a struggle, don’t expect perfection from others. This leads into compassion.

Feeling compassion for others helps us avoid damaging anger. If someone offends you, consider exactly what it is you are upset about. First of all, remember that much of our suffering only exists because we perceive ourselves to suffer or to be wronged, but that events are objective. If someone harms you or insults you, practice compassion for that person, maybe they were having a bad day, maybe they had a traumatic experience in their youth that influenced their actions to you. Does this excuse being unkind or harming others? No, but it can help explain it. By thinking deeply about the suffering of others, you may find it more difficult to be roused to anger by others.

Remember that anger is harmful to us. Studies have shown that people who harbor resentment, hold grudges, and constantly lose their temper are more likely to suffer from anxiety, depression, heart issues, and suffer earlier deaths. There is a prevailing notion in Western culture that certain levels of anger are not just normal but valued. We tend to promote instances of anger and outrage as examples of manliness, of toughness, and of confidence. In Eastern cultures this isn’t the case, as anger is seen instead as a sign of weakness, of a lack of self-control, and indicatory of selfishness. In Stoicism too they would have considered anger to be a lack of mental power, of the inability to maintain control of one’s power of reason. Getting angry and breaking things, hurting people, or making a scene isn’t manly and it isn’t strength, it is the absence of strength. Having control over your anger, or better yet, building the compassion and patience to avoid anger altogether, that is strength. By arriving at this state you have mastered control over yourself  and will project kindness and compassion for others instead of animosity and conflict.