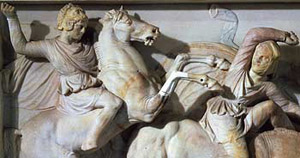 Alexander III of Macedon is regarded by many as one of the greatest humans to have ever lived. If you don’t know who Alexander III is, you might be more familiar with the name that history has granted him, that being Alexander the Great, the very addition of “the Great” demonstrating the validity of my opening sentence. I remember learning about Alexander the Great throughout the course of my education, from 7th grade Latin, to World History, and then finally visiting some of the very places where he himself walked during my study abroad throughout the Mediterranean region in 2009. I, like many students, was enamored with Alexander, thoroughly buying into the notion of his greatness. I wasn’t the only person to have felt this way about the Macedonian. His achievements have inspired other famous world leaders including Julius Caesar and Napoleon Bonaparte to name a couple, with the former reportedly breaking into tears at one point for not yet having reached the same level of accomplishment as Alexander.

This post is not intended to be a celebration of the life or a discussion of the greatness of Alexander. Instead, it is going to be a scathing criticism of both the man and of a society that tells us that he is great. If we consider a life dedicated to conquest, murder, subjugation, and narcissism, then yes, Alexander was great. The only way that the moniker of “Great” should rightfully be applied to Alexander III of Macedon is if we are to admit that greatness has absolutely nothing to do with values, ethics, morals, or compassion and only deals with infamy. That is not my opinion of greatness. I would say that Alexander is perhaps one of the poorest examples of Greatness in recorded history and is a perfect example of how not to live a life.

To understand my sentiment, let me first discuss at a very superficial level what Alexander did that history tells us to consider as greatness. Alexander was 17 when he became the King of Macedonia in northern Greece following the assassination of his father, Philip II. Upon his ascension to the throne, Alexander quickly quelled rebellions at home, uniting all of Greece under his banners before marching east towards Persia to avenge the destruction wrought on Greece several decades earlier by the Emperor Xerxes. Thus began several decades of constant conquest that would see Alexander expand the reaches of his kingdom across the known world, conquering the Persians, Egyptians, Bactrians, Scythians, and pushing his borders all the way to what is now India. Alexander’s Empire was the largest empire the world had ever seen to that date. Following his death at the age of 33, the empire quickly crumbled without its leader and the great empire descended into a mess of warring kingdoms. Alexander is remembered as someone who won great battles, founded cities, and established the largest empire to date.

Now, lets take a deeper look at what those accomplishments actually entail, while also more closely examining the man himself. To establish the largest empire ever is impressive I will say. I would not say that it is great, however, because in so doing he staged numerous battles of great size which led directly to the deaths of hundreds of thousands of men, if the records are to be believed, on both the side of his enemies and his own forces. I cannot look at a decision that directly leads to the death of hundreds of thousands if not millions as greatness. It would be one thing if these were battles fought against subjugated and repressed individuals such as the allied forces liberating Europe from the grasp of the Nazis. But these were, for the most part, perfectly happy lands that had lived in peace for generations until Alexander and his army marched in. Instead of living their lives in peace and prosperity, millions of lives were impacted by Alexander’s invasions directly through those who lost their lives or were injured in battle, or indirectly as they sought to deal with the fallout of war that included homelessness, starvation, and more.

All of this death and destruction was wrought through the decision of one man, Alexander, who decided that his own fame and glory were worth more than the lives of those who had to die in his realization of his vanities. The average person probably cannot name anyone from Alexander’s army other than the conquering King himself. Anyone else who fought alongside Alexander was forced to give up their lives and die in battle or dedicate themselves to a life of conquering in destruction, all in return for a life lived in anonymity, and that is to say nothing of the hundreds of thousands from the other sides, who became mere statistics of the vanquished enemy in Alexander’s selfish quest for glory. Not that the achievement of posthumous fame would matter anything to the dead.

The conquest of the world is impressive, but it is not admirable, and it certainly is not great. As a man, Alexander was deeply flawed. He was hopelessly incapable of controlling his temper or his impulses, as he repeatedly drank to excess, and on one such occasion killed his best friend and rumored lover, Hephaestion. Looking back to the inception of Alexander’s quest for conquest, we see a young man completely engulfed in an inferiority complex, desperately struggling to step out of his father’s shadow. He was ultimately successful in this aim but the expense was the loss of uncountable lives while he himself developed paranoia and stress that ultimately contributed his early demise. In his latter years he became extremely mistrusting of anyone and everyone, isolating himself from his oldest and closest confidants, and spending his final months obsessing over the fact that he might one day lose his power. It would be wrong to say that he successfully managed this great empire of his, as it quickly dissolved into several smaller empires taken over by his remaining generals, demonstrating a complete selfishness on the part of Alexander who couldn’t even be bothered to plan for a future in which he himself would cease to exist.

I believe that the significance of Alexander’s life is worthy of discussion in the history books, but I would not use the word great unless we are comfortable attributing the same title to other dictators who ruled with an iron fist and conquered vast empires at the expense of anyone who stood in their way. If I were a teacher and taught about Alexander, I would use him as an example of unchecked ego, insecurity, and a complete lack of empathy. There is a passage from a book called “The Virtues of War” by Steven Pressfield that accurately depicts the troubled figure of Alexander. The situation is that Alexander and his generals are crossing a river, but their path is blocked by an old wise man. One of Alexander’s generals shouts at the old man, insisting that he move out of the way of this great man, Alexander. The general says: “this man has conquered the world, what have you done?” The old man responded: “I have conquered the need to conquer the world.” This book is a work of fiction, but I believe the sentiment accurately portrays the type of egomaniac that was Alexander and how a true great man would be content to live a life of peace and anonymity rather than dedicate his life to the pursuit of fame. Years later, the great stoic Emperor Marcus Aurelius, a man whom I believe would be far more deserving of the title “Great”, would say this: “Alexander the Great and his mule driver both died and the same thing happened to both. They were absorbed alike into the life force of the world, or dissolved alike into atoms.” Yes, we still talk about Alexander, while nobody knows his mule driver, but what comfort is that to him now that he is dissolved to atoms. He died afraid, alone, and young, with nobody paying him any attention other than what might they take from him after his passing. I would say that tragic is a far greater description of Alexander’s life than Great. The only reason that I would think to mention him on this blog of happiness is that he is the perfect example of how to live the opposite of a happy life.