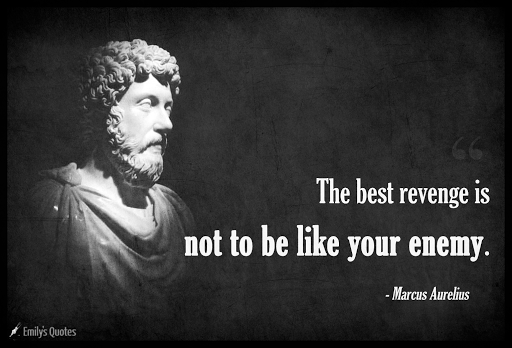 One of the most common themes in books, shows, movies, and legend throughout the course of recorded human history is the story of revenge. Revenge generally makes for an interesting and dramatic story. Our main character, usually either a well-to-do, mostly harmless individual or more commonly a former badass now committed to a life of peace, suddenly is the victim of heinous transgressions such as the murder of his family (the Punisher), the stealing of his significant other (the Iliad, Count of Monte Cristo), or the murder of a beloved pet (John Wick). The main character, usually a man, but not always (Kill Bill comes to mind) goes on an epic spree of revenge, wholly dedicating themselves to inflicting pain on any and all whom they perceive to have transgressed against them, and anybody unlucky enough to be even loosely connected to the plot. Then the book or the film ends, and our hero goes on to live happily ever after. Or do they?

I love a good revenge story as much as anyone, the deliverance of justice, the come-uppance of the evil-doers, and the kick ass action scenes that usually ensue on screen or on page make for great entertainment. As I dive more deeply into philosophy and psychology however, I cannot help but feel a sense of pity for these characters. First and foremost, whatever it is that usually sets them off is heartbreaking. Any parent can probably sympathize with Mel Gibson’s character in the Patriot has he unleashes a tomahawk wielding fury on the British following their murder of his son, and I can’t promise that I wouldn’t go John Wick on anybody who harmed my Floyd hound the way the title character’s canine companion was. That being said, the singular focus of these characters to bring harm to those who harmed them gives a grim view of our values of a society. While I can understand where the hateful emotions are coming from, I cannot support the intent and drive that is spent towards retribution. These characters think of nothing else but their own pain and sorrow and somehow believe that they will feel better by bringing destruction and then some against their aggressors. Does it feel good after getting revenge? I wouldn’t know, I’ve never gone on a revenge killing spree nor have I ever generally sought revenge period. Marcus Aurelius said that “the best way to get revenge is to not be like your enemy.” Your enemy has already caused harm, do not allow him or her the ultimate victory in corrupting your personhood and your values as they pull you down to their level.

Forgiveness is the better and more viable long term option here. By dedicating one’s life to revenge, one allows their life to be completely influenced by events outside of one’s control. Whatever happened cannot be undone. Do not allow whatever transgressions or crimes were committed to cause further harm by robbing you of the ability to live on your own terms according to your values. When we do this we surrender the possibility of having any true sense of joy in life and we in turn perpetuate the cycle of violence as we ourselves become aggressors and whether we justify that is a provoked attack, righteous vengeance, or justice served is irrelevant. Without a conscious effort by each and every one of us to dedicate ourselves to peace and to make the removal of suffering from the cycle of human existence as one of our primary goals, then the world may never know true happiness. As Gandhi said: “an eye for an eye makes the whole world blind.” 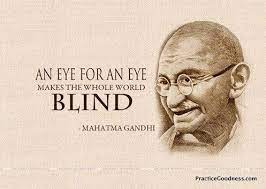 This says nothing about what happens to our protagonist after they complete their cycle of revenge. Then what? Are they happy now? Maybe, although whatever tragedy it was that set them on their murderous rage in the first place still happened. The past cant be changed and that void is still there. What will they devote their lives to now? What has happened to their purpose. In many ways it seems that the avenger is mistakenly trying to find meaning and purpose in their destruction of their enemies as a misplaced way of understanding their suffering and pain. Viktor Frankl tells us that one of the greatest ways to find happiness is to find meaning in suffering and in the trope of revenge, that meaning is manifested is in exacting harm on those who first harmed us. This horribly misses the point that Frankl was trying to make, as he never advocated revenge killings against his Nazi captors despite having every right to feel angry at the horrible atrocities they committed against him and millions of other Jews and ethnic minorities. The meaning that one ought to find in suffering, according to Frankl, would be meaning in adding something of value to the world. Exacting revenge adds no value to the world except selfish gratification in achieving that end, and instead only perpetuates the cycle of suffering.

Do not confuse my opposition to revenge as opposition to justice. Justice is how we enforce penalties for transgressions without allowing for a complete divulgence into perpetual chaos. Justice is a society putting its faith in a system and in shared values such that those who do wrong are punished in a deserved manner after a thorough examination and judgement of their wrongs. I believe that often times revenge is used to send a message, as it were, to deter any future harm committed not just by the original perpetrator but by any individual or party. I also believe that failure to seek revenge is often interpreted as a form of weakness. I prefer to view it as a sign of ultimate strength. Any animal, beast, or savage can lose control and act with ferocious rage in response to being harmed or wronged, but if we as a species ever hope to live up to the ideals and beliefs that we are the superior moral beings of the universe, then we must restrain ourselves. Losing one’s temper is not a sign of strength but rather the absence of strength as they are demonstrating quite clearly their inability to remain in control of their emotions and animalistic impulses. It could be said that this an over idealistic view of the world, while realistically there are any number of threats in many different shapes and that failure to use violence, or even mental or psychological retaliation as a deterrent will only result in harm. This is a legitimate concern as we seek to walk a peaceful path with enough presence and strength to deter an attack.

I do not honestly have an answer for the above conundrum, but I do have some real world examples where forgiveness rather than vengeance has proven to be a more gratifying option. In the Book of Joy, Archbishop Desmond Tutu references two women, one black and one white, who each lost family members as a result of the violent civil war during the apartheid movement in South Africa. Each woman lost someone dear to them and by most realist’s consideration would have been completely justified in their hatred and violence towards the guilty parties. That isn’t what happened. Both women, in separate instances, chose to forgive those who murdered their children and did their best to exercise compassion and understanding. I think these two women demonstrate exceptional bravery, courage, compassion, and strength to overcome what must have been violent and furious impulses and instead move to a place of peace. What would have happened had they chosen to respond violently or with hatred and malice instead? Who can say, they are only two people. However, we do know that while South Africa may not be the most peaceful place on earth, the civil war has ended and the various ethnic groups exist in relative harmony at least in such that apartheid has ended and there is no longer large-scale bloodshed. This was not because two women decided not to act violently, but when enough people commit themselves to forgiveness rather than vengeance, compassion rather than anger, and love rather than hatred, then the world becomes a better place.

As much as a good revenge story makes for entertainment in art and literature, it is hardly a worthwhile way to conduct oneself in reality. History and even the news today are full of horrible headlines of jealous spouses, angry employees, disgruntled neighbors and more taking vengeance upon a perceived insult or threat and creating tragedy. Seeking revenge will forever prolong the cycle of misery that too often exists in life. This isn’t a cynical view of the world but as most every major religion and philosophy would agree, suffering is part of life. How we deal with that suffering is what makes our character. By choosing forgiveness rather than vengeance, one creates a happier world as they consciously determine  not to contribute to the cycle of suffering that pervades existence. There is plenty in life about which to be joyful, optimistic, and happy, but when we choose to seek revenge , we blind ourselves from seeing the beauty of life and we rob others of the possibility to find it for themselves.