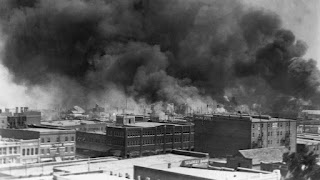 This is one of those posts that is going to seem like anything but happy. It is a post about cruelty, destruction, and murder during one of the darkest and most unknown events of American History. That event is the Tulsa Race Massacre of 1921. On May 31 and June 1 1921, a mob of angry white Americans, with the help of state and local government destroyed the black community of Greenwood in Tulsa Oklahoma.

If you have never heard of the Tulsa Race Massacre, you are not alone. I did not know anything about this had happened at all until I became aware last year, and until recently I still knew next to nothing. The 100 year anniversary of this crime has recently come and gone and my discussion of this topic is now late. Part of the reason for the delay is that I wanted to take the time to educate myself about this event before saying something. The fact that this is such an unknown part of our history is shameful and part of what I wanted to discuss. I cannot say that I am an expert at all now, in fact I am barely qualified to speak on this matter and all, but I have taken some time over the last few days to learn more, and I hope to encourage you to do the same. I will only discuss the history of what happened in brief detail. You can take the time to educate yourself on what happened with some of the resources I will provide at the end. My primary intention is to bring to attention the fact that this was a major incident in American history and that there is a massive attempt to either ignore or cover up what happened. Striving to be better as a nation and as a people does not mean only highlighting your strengths and accomplishments. It also involves taking ownership of mistakes and making concerted attempts to rectify past transgressions. Until such incidents as the Tulsa Race Massacre are widely discussed and addressed, then we ignore the possibility of attaining true equality, peace, and prosperity for all. The reason a post like this belongs on my blog about happiness is because ignoring this fact prevents us from realizing a happy and joyous life for all. Until the opportunity for a happy and joyous existence is offered equally to all, then we are living in self imposed suffering and shame.

In the 1800s, a number of African Americans had migrated to Tulsa Oklahoma. Oklahoma was a territory at the time rather than a state, and as such it offered the opportunity of owning land and property to African Americans who were elsewhere denied that right. Tulsa in particular became a hub of economic growth and prosperity with the discovery of oil. The prosperity and allure of Tulsa prompted several wealthy and prominent African American businessmen including O.W. Gurley to purchase land in Tulsa, at what would eventually become known as Greenwood. Gurley opened banks that gave loans to African Americans and purchased more and more land which he would in turn sell exclusively to African Americans. Though Oklahoma became a state in the early 1900s and brought with It the restrictive Jim Crow Laws, the opportunities to own land and be part of a black utopia of sorts in Greenwood enticed more and more African Americans to move to the area. Because this neighborhood was black owned and black friendly, the local economy was boosted providing growth and prosperity for the residents. The neighborhood was so prosperous that it became known by many as “Black Wallstreet.”

Naturally the success of the Black community drew the envy and ire of local non-Blacks. There is and there was a widely accepted notion across our nation that White’s were the superior race, that this country belonged to them and that success was theirs and not for others. That a Black Community could thrive and prosper right here in their very own back yard was an affront to their concept of American, and particularly White, exceptionalism. This has and always has been an attitude of imperialistic societies: that there is a master race and then there are those beneath them.

The specific incident that sparked the powder-keg of growing tension that was Black prosperity and White hatred and envy for that prosperity involved claims of assault. Dick Rowland, a 19 year old African American, was accused of Assaulting Sarah Page, a teenaged white girl, on the elevator which she operated. Rowland was arrested by local authorities but never charged. Reports have it that a white mob demanded that Rowland be handed over to them for extra-judicious sentencing, a theme played out time and time again with white mobs lynching any African American even remotely associated with any sort of transgression against a white person, including something as minor as looking in their general direction.

In response, a group of armed African American veterans from Greenwood marched to the courthouse and offered to protect Rowland. What happened next is precisely what happened any time throughout history where a group of the oppressed has the audacity to stand up for their own basic rights against their oppressors. The armed Black citizens provided precisely the provocation that the white mob needed and violence ensued. The immediateness and apparent level of organization in the white mob’s response indicates that such an event may have been planned for some time, needing only the ideal situation to justify a violent response. This is yet another theme played out in history of imperialism and oppression, one that is often called brinksmanship. This is when one group, typically the more powerful, will put pressure on another group in the form of subtle but effective aggressions such as economic sanctions, destruction of rights etc. Eventually the oppressed group stands up for itself, typically in a violent or aggressive outburst. It is often minor in the relation to the aggressions first committed by the oppressor but it allows the oppressor to point to a single act of violence and justify their often grossly asymmetrical response. It is what happened at Pearl Harbor where the United States froze Japanese assets and restricted the critical import of oil and other goods, provoking the Japanese attack. It is what happens today in Palestine where Israeli forces repeatedly restrict the basic human rights of Palestinians and aggressively assault them, provoking a predictable response and thus eliciting the opportunity for even greater Israeli aggression. This is precisely what happened here in Tulsa. The White mob murdered over 300 Black residents of Tulsa, destroyed approximately 5,000 homes and other properties completely crippling the community in such a way that it still has not recovered to this day.

The only thing more egregious than the attack itself is the apparent cover up or refusal to acknowledge. With the destruction of the one and only Black owned newspaper, the Tulsa star, no media coverage was given to the attack. It was simply as if it had not happened. An official inquiry was made shortly after with documents never released to the public. What little attention was given was blamed on the veterans who were portrayed as instigators. Repeated appeals have been made in courts to seek restitution for the surviving victims and their families. These have been repeatedly rejected despite having been brought all the way before the US Supreme Court. Even legislation demanding that this event be taught in school was repeatedly denied.

The official response to this atrocity is telling. It simply is not important enough to warrant any attention. Why? Because the crime was committed against of people who do not matter to the country and because acknowledging what happened would paint the ruling class in the wrong light. Imagine if the roles were reversed, and an angry Black mob destroyed an entire White community? I cannot even begin to imagine the ferocity of the outrage and the response to such an attack. It wasn’t until the last decade or so that any sort of an empathetic response was given though these were in the minor forms of officially renaming the commission from The Tulsa Riot Commission to the Tulsa Massacre Commission, having a baseball stadium named after John Hope Franklin, and finally allowing the history of the massacre to be taught in schools.

You should be upset when you learn about this stain on our history, and you should be outraged at the lack of a meaningful response and at the collective ignorance surrounding the event. I was appalled when I found out about this and I was mad at myself for not being aware until I was in my 30s. That does not mean you should feel guilty. What you should feel guilty about is if you do become aware of this and do nothing about it. Ignorance is no longer an excuse. If this country is ever to live up to the ideals upon which it was supposedly founded then we must take ownership of our worst sins. Life, liberty, and the pursuit of happiness are the rights that Thomas Jefferson rightly called out as unalienable, they cannot be taken and are deserved by all. Yet history has shown us that in the United States, the rights to life, liberty, and the pursuit of happiness are repeatedly denied and stolen from minorities, with the African American community historically being one the most targeted. Such instances that run counter to the idea of our own moral and spiritual superiority are avoided because they cast us in a light in which we are ashamed to be seen. We have the potential to live up to the ideals that were to make this country great. Until we confront our past head on and address the issues of the past, still present today, then we have not created a happy and harmonious society but merely the illusion of such. A major step towards the recognizing the pursuit of happiness for all is to acknowledge, educate, and make amends for our past. To acknowledge our errors, to recognize our faults, and ensure they are not repeated is the only way to progress. Ignoring such a past does nothing but promulgate the further aggression, brutality, and dehumanization of others.

I do not write this with any sense of moral superiority because I have made myself aware. At this done I have hardly done the bare minimum, but I hope this is a step in the right direction for myself and others. Please take the time to educate yourself about Tulsa and about the history of oppression against African Americans and other ethnic groups. It is not fun and it is not comfortable whether you belong to the oppressed or oppressors. It is however, necessary. If we want to build a happier and more just world for all to enjoy, we must come to terms with our history, learn from it, and strive to do better.

If you are interested, please utilize the below resources for continuing your own education about the Tulsa Massacre.

The Groundbreaking: An American City and It’s Search for Justice