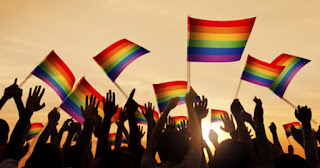 It is now June, and we are celebrating Pride month. Pride month has been observed every year since 1999 both in the United States and around the world. The month is marked by celebrations, parades, concerts, speeches, symposiums where members of the Lesbian, Gay, Bi-sexual, and Transexual community celebrate who they are. Above all else, the month is about celebrating life and for people to enjoy themselves for the amazing people they are. It is also a moment for raising awareness and pushing for progress. Though great strides have been made particularly in the last two decades, the fight for equality amongst those in the LGBT community is far from over. This post will give a brief discussion of what Pride is and why it is needed. We will also detail the history of oppression to freedom and happiness that the LGBT community has faced.

The history of discrimination and oppression of the LGBT community goes back centuries, but this discussion will focus on the more modern context of those events leading directly to the formation of the modern pride movement and specifically within the United States. Following World War II there was a strong conservative movement in the United States as we found ourselves facing what was considered by many to be the supreme evil in the Soviet Union. Policy makers and the public alike called for a strong return to traditional values and pro-American sentiment such that anything deemed unamerican was considered dangerous and severely repressed if not outright banned. Of most obvious concern were communists and anarchists however the scrutiny and oppression was not limited to these groups alone. The United States State Department identified homosexuals as security risks, believing that they were susceptible to blackmail and could be used by Soviet Agents to destroy America. As such, the FBI kept a list of all known homosexuals and their associates. Prior to the 1960’s, homosexuality was essentially outlawed as anti-sodomy laws existed in all 50 states until the law was eventually overruled by Illinois in 1961.

At this time gay establishments including bars, clubs, and inns began opening in select locations. They were frequently raided and assaulted police forces and faced constant threats of violence and harassment from other members of the community at large. One such raid took place early in the morning of June 28,1969 at the Stonewall Inn in New York City. This raid involved several gay patrons being forcibly removed from the Inn, beaten, and then arrested for resisting. Crowds quickly assembled in response to the commotion with outrage to the brutal actions of the police, who responded with greater violence until a riot broke out. The riot would last for 3 days and would eventually thrust the plight of not only gays but all members of the LGBT community into the spotlight. Eventually, Bill Clinton would designate June to be Pride month in honor of the Stonewall riots.

Those who are not fully informed or aware may wonder why there is a gay pride month. Why not a straight pride month? Why not just have it be June, sexuality doesn’t matter does it? Wrong. The reason there needs to be a gay pride month is that throughout all modern society, members of the LGBT have been discriminated against, persecuted, harassed, assaulted, murdered, and received less rights as individuals. The anti-sodomy laws I mentioned above, which essentially made it illegal to be gay, weren’t repealed until the 1960s. Gay’s were directly targeted during the Holocaust of Nazi Germany, being required to wear a pink triangle, denoting their homosexuality and announcing that they were specifically targeted for their sexual orientation. In the UK, known homosexuals were required to serve jail time or be chemically castrated, such that they might not reproduce and spread their gayness genetically (absurd).

Nowhere in the world was it legal for gay’s to be married until the first same-sex marriage took place in the Netherlands in 2001. Today, twenty years later, only 29 countries have legalized same-sex marriage. The United States did not fully get on board until the Supreme Court legalized gay marriage in all 50 states in 2015. Same sex couples could not adopt children in all 50 US states until a Mississippi ban was overturned in 2016. It isn’t just the legal discrimination. The LGBT community faces hatred, violence, and discrimination from the public at large. Members of the LGBT community are 4x more likely to be the victim of a violent crime than their heterosexual counter parts and are 5x more likely to have attempted suicide.

The statistics and information I have just given are exactly the reason why we need pride. Because being heterosexual was never illegal; because heterosexuals were always allowed to be married; because heterosexuals aren’t ostracized from their families for being straight; because heterosexuals aren’t assaulted for being straight. I could elaborate but I think the case is made. Imagine being told by the world that who you are is wrong, that your very existence is a crime against society and an affront to nature. Imagine being so tormented for just wanting to be yourself that you turn to suicide. Imagine that holding hands on a walk with your partner could get you assaulted as part of a cheap thrill for some assholes. This is reality for the gay community.

It is time for society to wake up and acknowledge the wrongdoings against the LGBT community. We must embrace and celebrate every individual for who they are because everyone is special. This blog is about promoting fairness, happiness, equality, and love to all. In honor of Pride, I first want to say that I proudly stand with and support the LGBT community and celebrate their existence. As part of that I pledge to take the time to be more aware of how my own thoughts and actions might contribute to any negativity and make a conscious effort to be part of the progress. I would urge all of my readers to take the time to educate themselves about the historic struggle of the LGBT community. Think about how you can be an ally and how you can help support the lives of your fellow humans. I am thrilled at the progress that has been made but I know that we have not yet arrived at equality. The fight will continue. For now, let us celebrate and honor the right to happy and joyous lives for the LGBT community.

Here is a list of books that you can use to learn more about the Pride movement and the struggle for LGBT equality.