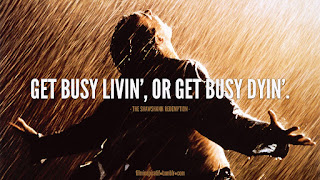 “Get busy living or get busy dying”. That is one of the better-known quotes from “the Shawshank Redemption” a film that revolves around Andy Dufresne, a man wrongfully convicted of murdering his wife and forced to spend the rest of his life in Shawshank prison. Andy says this to his friend Red shortly before he escapes from prison to go enjoy his freedom on a beach in Mexico. This quote embodies the mindset that there are really only two choices in life: to get busy living or to get busy dying. We know that much of what happens to us and to the world is not under any of our control. Andy had no control over the outcome of his trial, over the fact that he was imprisoned even though he knew he was innocent. He could have chosen to spend his life bemoaning his fate, railing against the unfairness of his situation, and feeling miserable knowing he deserved to be free. Instead, he recognized that he couldn’t control his sentence, but he could control his life by remaining steadfast in his values, making friends in a difficult situation, and at the same time working tirelessly to earn his freedom. Andy spent years tunneling out of Shawshank prison before he was finally able to escape. That much he could control. He made the decision to get busy living.

I enjoy not only this quote but also Andy’s decision for two reasons. 1) Andy’s decision represented the best in stoic behavior, as he refused to let his mind, reason, and outlook be changed even by his unfortunate circumstances. 2) The reminder to get busy living is something that I have come across several times lately throughout my reading and I thought it was important to discuss that here in today’s post. An important reminder in stoicism, Buddhism, and practically any philosophy, or at least any that interest me, is that they are simply guides to how to live happily but are not the ultimate source of happiness in of themselves.  Both Buddhism and Stoicism, to use them as my primary examples, repeatedly emphasize that they are intended to educate and guide people on the path to enlightenment, the good life, or happiness. In order to actually realize those goals however, the individual must get busy living. Get out in the world and live your life, let your guiding philosophy show you the way and help you in your decisions but do not forget to actually live.

Buddhism continuously iterates the point that Buddha did not claim to be a god,  but was merely a man who felt as if his wisdom had given him a unique perspective, and who wished to share that perspective with others. He was fond of saying “my teaching is like a finger pointing to the moon. Do not mistake the finger for the moon,” reminding his disciples that he could only point them in the right direction. In order to find the path to enlightenment for which Buddhists seek, the must find it themselves and that the way to do that was by living a life in accordance with their values. 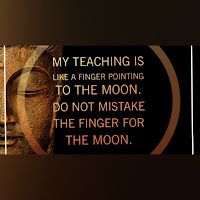 There is a certain sect of Buddhism called Mahayana Buddhism wherein the monks completely withdraw from public life, existing in solitude in complete devotion to losing their sense of self and removing all suffering. This may be the stereotypical notion of Buddhism but is likely not what the Buddha really wanted. In his book “The Heart of the Buddha’s Teaching, Buddhist Scholar Thich Nhat Hanh teaches us that Buddha’s teachings “were not to escape from life, but to help us relate to ourselves and the world as thoroughly as possible.” Walpola Rahula, another Buddhist scholar of note, believed it was more praiseworthy to practice Buddhism living among your fellow human beings, to help one another and build happiness together, saying in his book “What the Buddha Taught”: “if a man lives all his life in solitude, thinking only of his own happiness and salvation, without caring for his fellows, this surely is not in keeping with the Buddha’s teaching which is based on love, compassion, and service to others.”

These two scholars remind us that the important thing about Buddhism, among other religions and philosophies, is that they are intended to make us better people such that we can get more joy out of life and put more joy out into the world. While you may find a sense of inner calm by retreating into solitude, you are missing the best of what life has to offer and you are missing a chance to play an active role in improving the spirit of the universe.

Similar sentiments are regularly expressed in Stoicism. Epictetus was born a slave but he focused his thoughts and efforts on what was in his control and was able to become a wealthy free man. He didn’t lament his lowly position in life, instead he got busy living and won his freedom, while still keeping a humble appreciation and gratitude for the simple things in life, rather than letting fame and wealth corrupt his spirit. Seneca was exiled after having been falsely accused of crimes against the emperor. He didn’t bemoan the loss of his status and privilege but remained steadfast in his reason and continued to live an exemplary life. Marcus Aurelius taught us to: “get busy with life’s purpose, toss aside empty hopes, get active in your own rescue—if you care for yourself at all—and do it while you can.” This is his reminder to us to get busy living. The Stoics often remind us that the entirety of their teachings are worthless if we simply absorb them in private but never venture into the public sphere of life and actually practice what we learn.

Philosophy is a lesson in living, not a lesson in how to think happy thoughts while living alone on an island and interacting with exactly nobody. Sometimes we are so busy focusing on improvement, or on our current circumstances, that we forget to just enjoy life. We either lament our misfortunes and forget to take in the beauty of existence or we spend so much time waiting for the right moment or chasing perfection that we forgo the chance to enjoy the here and now. I was recently reminded of this. I am constantly looking for ways to improve myself: whether it be my fitness and health, learning languages, my job, writing, reading etc. – I am obsessed with trying to become better at anything. These are all worthwhile pursuits as they add value and meaning to my life, bring me happiness, and help make me a better person but they often distract from simple joys and happiness with people that matter. Last weekend I had the pleasure of spending several days with my sister visiting our parents. I had a lovely, care-free time, during which I barely spent any time reading, writing, or studying languages, things I normally do daily. Why? Because I was so busy just living in the moment, getting busy living. I have done the same thing for the past several nights since returning, opting instead of reading like I normally do, to simply cuddle and watch tv with my girlfriend instead. The past week has been extremely relaxing and gratifying because I took the time to get busy living rather than constantly stress over progress or other extraneous concepts. Of course I am not giving these pursuits up, but it is important to put such things aside from time to time so we can shift our perspective and remember to be happy in the little things and to simply enjoy life. As they say, if you enjoy the present enough, you might just make a life out of it.