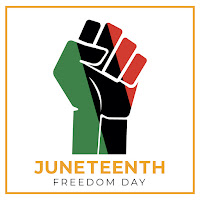 Today is June 19th, 2021, and from this date forward the date shall be recognized, celebrated, and honored as a national holiday. June nineteenth, or Juneteenth as it has been called, is recognized as Emancipation Day, the day when US Army General Gordon Granger arrived in Texas and ordered the state to free all black slaves on the same date in 1865. The African American community has been celebrating this date as a holiday for over a century now and at long last it has finally received the attention at the federal and nationwide level which it deserves.

I must shamefully admit that until last year I was completely unaware of the meaning of Juneteenth or that there even was a holiday called Juneteenth. I am likely not alone in this regard precisely for the very reason that until this year the holiday received no attention and was not even recognized as an official holiday. Hopefully, with the Biden administration making Juneteenth an official holiday, citizens of our country will take the time to educate themselves and others about the significance of this historic moment.

The United States was founded as a nation with the aspirations of providing freedom, liberty, and justice for all. Written into the first paragraph of the Declaration of Independence, the document that represents the very best of what this nation can be, are the rights of life, liberty, and the pursuit of happiness. These rights were described by Thomas Jefferson, the author of the document as unalienable – rights that could not be rescinded.

For much of our history however, those unalienable rights have been denied to African Americans and their African slave ancestors who were brought over in slavery and chains before them. Eventually the issue of slavery would come to a boiling point as one of the critical issues contributing to the Civil War in 1861. In 1863 President Lincoln issued the emancipation proclamation, declaring the abolishment of slavery. It is important to note however that President Lincoln only ordered the freedom of slaves in the southern Confederate States, states which had declared themselves free and independent of the United States and thus not under the authority of President Lincoln. Thus, the emancipation proclamation was largely ignored, until Union soldiers liberated slaves from the southern states one by one as they moved threw the territory. On June 19th , 1865 union forces liberated the slaves of Texas, the last southern state to be reached and ordered to free their slaves. It was not however until the ratification of the 13th constitutional amendment in December of 1865 that slavery was officially made illegal in all states – Delaware and Kentucky for example were states where slavery was legal, but did not fall under the scope of Lincoln’s Emancipation Proclamation because they were loyal to the Union.

At long last, slavery was made illegal. The formal abolition of slavery did not immediately rectify the unjust situation of African Americans, not by a long shot. With one form of oppression abolished, several more would rise to take its place and African Americans would continue, and still do to this day face racism, oppression, and discrimination on both personal and systemic levels. There has been much celebration of Juneteenth being recognized as an official holiday and for good reason. This is a long overdue move by our nation to acknowledge the violent and oppressed history of our African American population. With Juneteenth becoming a national holiday we have the opportunity to educate ourselves and others about the history of racism in this country. If we are to move forward and become the nation of ideals and principals, a nation of liberty and justice for all, then we must acknowledge our violent and messy history. While the creation of this new holiday is a major step, the struggle for equality is far from over. My hope is that this will be the first in a series of moves that allows us to more critically examine the history, but more importantly the presence of racism and oppression today. If we can do this then we may actually become that ideal nation that the declaration of Independence set us up to be.

Happy Juneteenth to all.