“Ultimately, to be properly successful is to be at peace.” – Alain de Botton

Michael de Botton is a modern day philosopher from Switzerland who has published a number of books that apply philosophical concepts reminiscent of the stoics to modern day scenarios.

In my blog I often write about people who are successful, borrowing their thoughts and strategies for achieving success and adopting them such that the same methods can be applied to discover happiness.

I would say that the highest form of success is happiness, which like de Botton, I believe can accurately be described as a state of peace and contentment.

True success is realized when we arrive at a mental state wherein we have no cravings, desires, overwhelming fears, and no anxieties. The best part about this is that it does not require obscene amounts of wealth or shiny possessions. It may look like that to some, but that very same notion of success or happiness is readily available to anyone who can reign in control of their own mind. 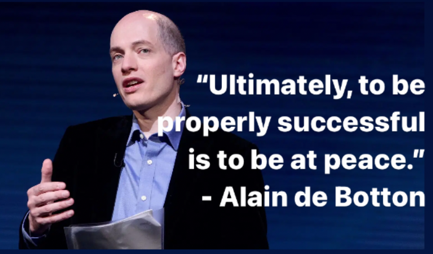