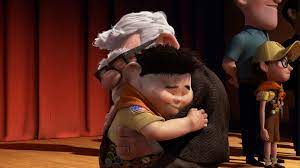 After 12 years of living under a rock I finally allowed myself to watch the movie Up last night. This was a recommendation from my girlfriend who, not for the first time, hit it out of the park with yet another A+ movie selection. It is fitting that I should watch this highly acclaimed movie now, so recently after the death of Ed Asner, the voice of Mr. Carl Fredricksen, who passed away just several days ago on August 29, 2021. I am glad I finally had the opportunity to watch this film and to share it with someone special. If you haven’t seen Up, which by now most of you probably have, I highly recommend it. If you have watched it, watch it again. Not only does it provide 90 minutes of laughter, emotions both high and low, and entertainment, but I believe it contains some valuable commentary on life and human psychology, not uncommon for the folks at Pixar studios.

My post today is on the 3 most important things I learned from the movie “Up” (Spoilers ahead – obviously).

Lesson 1: The real adventure is the everyday.

A large theme in the plot of the film is Mr. Carl Fredricksen’s determination to move to paradise falls, bringing his house with him, fulfilling the life long dream that he and his late wife Ellie shared together for so long. Carl is almost singularly focused on achieving this dream, believing that he owes it to both Ellie and himself to make this dream become a reality. At times his focus on this goal comes at the detriment of others such as Russell or Kevin the bird.

One of the most pivotal moments of the movie comes when Carl sits down in his favorite chair, next to the now empty seat that was so often occupied by the now deceased Ellie, and opens up the adventure book. The adventure book was something that Carl and Ellie had put together since meeting as children and bonding over their shared love of adventure and their dream of one day moving to the legendary Paradise Falls. 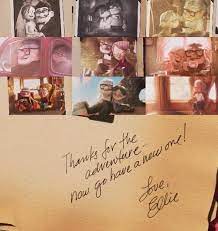 After flipping through several pages worth of material that young Carl and Young Ellie had put together, Carl comes across a section he had never seen before, that being “Stuff I am going to do.” Carl flips forward to find the pages plastered with various images of Carl and Ellie, clearly in love and happy together, sharing simple pleasures like a picnic in the park, or a car ride together. The last photo is presumably the last photo the two took together before Ellie’s passing, showing a much older Carl and Ellie than the opening pages of the book, but perhaps happier together and more in love than ever before. The last entry into the book is a passage saying “Thanks for the adventure – now go have a new one! Love, Ellie.”

At this point I found myself with visible tears running down my cheek, not for the first time, being so struck by the beauty and emotion. The significance of this moment was profound not only for Carl but also by myself, and presumably others. What I took away from this: Carl and Ellie had dreamed of getting to Paradise Falls for their whole lives. That Ellie had passed before they were able to achieve this goal made Carl feel unhappy and guilty, and presumably must have felt a sense of sorrow for Ellie, perceiving her to be unhappy for not having lived to see their dream come true. This scene erases that feeling and opens Carl’s eyes to the fact that he and Ellie did in fact live a long and fulfilling life together and that they were happy all along.

This uplifting moment marked a pivotal change for Carl Fredricksen and should provide an equally powerful reminder to the audience that happiness, the real adventure of life, lies in the everyday. Carl was obsessed with having his great adventure with Ellie, only to realize that he did have that adventure, he got to spend most of his life with her. Who could ask for something more adventurous, more fulfilling, or happier than that?

Like most of you, I too have some dream vacations and adventures that I want to fulfill. Be mindful that these may never happen, such is the nature of dreams. If they don’t happen, remember that these moments aren’t what make your life happy, or provide real meaning, they are just a little extra moment of extreme excitement. If they do happen, remember to make your everyday count, not just those few moments of bliss.

Lesson 2: The boring stuff is the important stuff

This is paraphrased and based off what I think is the most important line spoken by Russell, the young boy who unwittingly finds himself flying south with Mr. Fredricksen. Speaking of the few fond memories he has with his now absentee father, Russell says: “the boring stuff is what I remember most.” 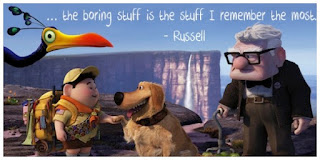 This idea ties in closely with lesson 1 from above. 99% of life is going to be boring stuff. Most of us will spend very little time, if any, doing anything truly epic, adventurous, exotic, or exciting. Even those who seem fortunate to enjoy a life of extreme excitement or adventure often find themselves horribly depressed with all of the activity being a mere distraction, or live lives such as they are unable to enjoy the simple pleasures in life, always searching for the next rush (sadly, many such people become abusers of drugs and alcohol.)

Rather than living our lives for that 1% of abnormal excitement and adventure, we can make our lives and find our happiness in the 99%, in the “boring” as Russell would say it. The 99% is where real life takes place. This is where we spend most of our time. As such, it is in our best interest to stop pining for that 1% where we may feel truly alive, and instead find happiness and love in the boring moments.

Lesson 3: Living in the past prevents happiness in the present

This will be a short section as most of what needs to be said on this matter has already been said. We see the best version of Mr. Fredricksen come to screen after reading the aforementioned passage from Ellie, urging him to go make a new adventure. From that point on we see a reinvigorated and more upbeat Carl. Carl seems full of courage and enthusiasm for life for the first time since Ellie’s death in the opening scenes. Carl helps rescue Kevin and Russell, befriends Doug, and allows himself to once again be happy and enjoy life.

The lesson this provides is that Carl’s failure to move on from the death of Ellie and their unfulfilled dream of reaching Paradise Falls was preventing him from happiness. Death is a tragedy, make no mistake about it. I know firsthand as do all of us that the death of a close relative, friend, or loved one, is one of the most devastating moments we deal with in our lives. It is also the most inevitable moment, and for that reason we should not allow death, nor any other misfortune of our past prevent us from realizing joy and happiness in the future. Don’t let death, or anything else from your past hold you back. Cherish the good and happy moments in your personal history, but do not live in the past. No amount of guilt, shame, pain, or denial will be able to change the past. All we can do is make peace with it and move forward.