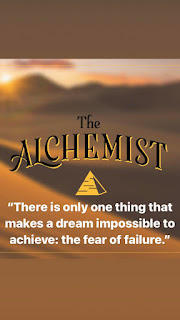 “There is only one thing that makes a dream impossible to achieve: the fear of failure.” – Paulo Coelho

I put the Alchemist in the “Favorite Books” section of my blog almost immediately after having finished it for the second time several months ago. Paulo Coelho is perhaps the greatest author alive today when it comes to speaking to the heart about finding the courage to pursue our dreams and higher calling.

In reviewing my notes on that book I came across the quote that I am sharing for today’s thought of the day as it ties in with the notion of failure that I have spoken of several times already in the past few weeks.

People often use the fear of failure as their primary motive for inaction. I will reiterate past discussions and say that the only way we truly fail is when we do not even make an attempt. The only failure is inaction. We often let our fear of failure prevent us from taking action because we are afraid that the failure will make us vulnerable, that it will allow the world to see us as we truly are – which is imperfect.