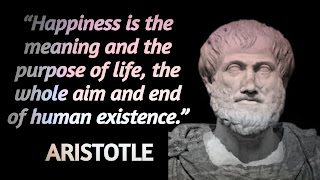 One of the greatest issues in understanding happiness, particularly from behind the lens of Western culture, is how do we balance happiness and acceptance of our imperfect selves at this present moment with the ideal version of ourselves, that fleeting and successful realization of our fullest potential that lives somewhere off in the unknown future? It may be that the truest form of happiness follows the philosophies of the Eastern religions, that being that happiness lies is in total acceptance and surrender of all control and a state of simply being, namely in the present moment, rather than striving for any sort of meaningful change or accomplishment – a struggle against existence.

Despite the reasonable amount of evidence and experience that suggests the truth in the Eastern religious beliefs or their teachings which Watts, among others, has transcribed for us, concept is difficult for many, particularly those raised in western culture who are taught that happiness is a byproduct of achievement. What then are we to do in order to be happy, knowing that for many of the ability to create happiness lies in our pursuit of the ideal version of our Self?

Yesterday’s post was about taking action to become our most successful self, defining success as the ideal or most closely perfect version of ourselves – with perfect being understood as unattainable. The beauty of striving for improvement and progress, provided our aims are altruistic rather than merely selfish or hedonic, is that in making ourselves better we make the world better, or one could say: happier. The problem for so many is that our idea of success becomes such a focus that we postpone our happiness until we have achieved such success, believing that our present self is unworthy until this or that goal has been realized. Even upon the accomplishment of our goals, many find themselves dissatisfied because just as a false summit on a mountain reveals another summit 100 yards ahead – with that summit itself later proving to be false as well, so to do we find ourselves immediately focused on the next goal rather than feeling gratitude or pride in our having made it thus far.

In yesterday’s post we discussed the need for acceptance before one even begins their pursuit of success and their ideal self. This is the most difficult concept for many of us to grasp – knowing that even though we have conceptualized a better version of ourselves, that we do not NEED to become that but merely that we ought to try because it can only help others. That is not to say that we are unworthy if we fail, but merely an admission that while recognizing our

Enter the research of Shawn Achor. Coming across some of his research during my morning read, I felt that his work was shedding light on a major blind spot in understanding the relationship of happiness and success. Shawn has spent his life studying the relationship between happiness and various measures of success. What he and his colleagues discovered was that becoming happy BEFORE pursuing success would in turn make one more successful by every meaningful measure rather than pursuing success from a negative state or waiting on success to provide happiness.

Dr. Achor and his colleagues demonstrated their hypothesis by testing a group of individuals on various subjective measures of productivity and happiness – namely the life satisfaction scale which is widely accepted as the most accurate predictor of both happiness and productivity at work. The experimental subjects were asked to perform 1 of the following rituals every day for 21 days: write 3 gratitudes, exercise, write a positive message to someone in their support group, meditate, or write about their most meaningful experience of the past day. People who did this tested higher on the life satisfaction scale than the control group not just in the short term, but even 4 months later, despite the experimental intervention having ended months earlier – thus demonstrating a long-term correlation between happiness and productivity, i.e. success at work.

The significance of this research reveals that happiness must come before success rather than as a byproduct of success. Working on our happiness right now, accepting ourselves, and taking control of that which is in our control will enable us to become successful and to become that ideal version of ourselves which we discussed recently.

Central to the synthesis of happiness in Dr. Achor’s research were habits that enabled the experimental subjects to produce happy states. We know that happiness is a decision rather than a reaction, and we know that it is available in the present moment but once again it requires action. Even arriving in mental states of acceptance and love require action of the mind. This is precisely what meditation is. Meditation teaches us to tune out distractions, to organize our thoughts, and to focus energy but it also allows us to accept ourselves as we are and our place as just one small expression of an infinitely large cosmos.

This is not a passive process and nor are any other habits lead to happiness. Meditating, journaling, giving gratitude, and exercise all require action. The human brain has demonstrated the remarkable ability to change over time, a term called neuroplasticity, suggesting that stimuli, thoughts, or behaviors, over time will have a transformative effect on the brain. The same way a bicep muscle grows by repeatedly doing curls, or chin-ups in the gym, the brain and neural pathways are altered over time by constant exposure to various stimuli. This reinforces the importance of action, as when we repeatedly subject our brain to stimuli that are proven to enhance happiness, we create a brain and a psyche for which elevated levels of happiness become the norm.

Brains that are thus wired are wired for success because they already possess the precondition of happiness that is necessary for success. Such brains enable us to become more successful primarily because of the way they react to stress. Stress is a constant in life but the brain of a happy person, someone who practices gratitude or meditation knows how to respond to such stress, either by dismissing it or better yet by using it as a challenge. Many of the most successful and happy people are those who take the stress from their lives, the same type of stress we all face, and use it as motivation or a challenge. Many of humankind’s most impressive accomplishments, best inventions, or heroic feats have come in direct opposition to high-stress situations.

Knowing that happiness precedes success, we are tasked with the aim of becoming happy. Aristotle once said: “Happiness is the meaning and the purpose of life, the whole aim and end of human existence.” Happiness is or should be the chief aim of life because it allows us to live in harmony with all things and because it is a necessary precondition for the achievement of success which benefits the entirety of the cosmos. It begins with a decision to be happy now but requires action and habit over time to reinforce thoughts and behaviors that ideally arm us in our attainment of happiness and success.

So, take action today in developing the habits that will facilitate your decision to be happy. Once you take this action you will realize that you have been worthy of acceptance and happiness all along and will have built the necessary habits to pursue the most successful and happiest version of yourself.

2 thoughts on “Happiness Comes BEFORE Success”